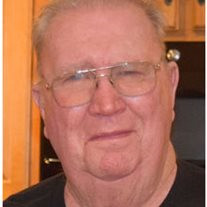 A.J. Giorza, 81 of Higginsville, Missouri died on Monday, May 8, 2017, at Rosewood Health & Rehabilitation Center in Independence, Missouri. Born Tuesday, May 21, 1935 in Lexington, Missouri, he was the son of the late Americo J. Giorza, Sr. and the late Dorothy Gray Giorza. He was a graduate of the class of 1953 at Lexington High School, then served in the National Guard from 1958-1965. He married Barbara L. Chapman on March 3, 1957 and she survives of the home in Higginsville. MO. A.J. moved to Higginsville in 1955 and owned and operated a Standard gas station. He was then employed at West Central Electric Cooperative in November, 1958 as an apprentice lineman, and became a lineman supervisor before serving as the Material Clerk until his retirement in 2000. He was a member of First Presbyterian Church and very active in the community as a member of the Higginsville Oddfellows Lodge, former member of the Higginsville Jaycees, Alderman of the City of Higginsville and the Higginsville Chamber of Commerce. He was also a member of the I.B.E.W. Union. He was the happiest spending time at the lake with daughter Kimberly and family. Those that knew him well remember him as always building something. Surviving are one daughter, Kimberly (Robert) Agan of Blue Springs, MO; four grandchildren, Danielle McCurdy, Colby McCurdy, Amanda McCurdy and Blake Agan. A funeral service will be at 10:30 AM on Friday at First Presbyterian Church with the Rev. Steven L. Goughnour officiating. Interment will be in City Cemetery, Higginsville. The family will receive friends from 6:30 PM to 7:30 PM on Thursday, May 11, 2017, at Hoefer Funeral Home. Suggested memorials are to Higginsville Heat & Hunger. Casket bearers are Colby McCurdy, Robert Martin, Jorge Irby, Robert Agan, Mark Zeikle and Paul Werning. Honorary bearers are Bill Davenport, Darrel Rinne, J.W. Starke, John R. Zeikle, Ben Lewis, Bob Jarman, Darrel Tilly and Larry Nadler. Online condolences may be made to the family at www.hoeferfuneralhome.com

A.J. Giorza, 81 of Higginsville, Missouri died on Monday, May 8, 2017, at Rosewood Health & Rehabilitation Center in Independence, Missouri. Born Tuesday, May 21, 1935 in Lexington, Missouri, he was the son of the late Americo J. Giorza, Sr.... View Obituary & Service Information

The family of A.J. Giorza created this Life Tributes page to make it easy to share your memories.

A.J. Giorza, 81 of Higginsville, Missouri died on Monday, May...

Send flowers to the Giorza family.