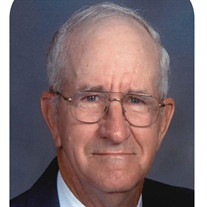 Alfred Russell Riekhof, 82 of Mayview, Missouri died on Saturday, April 27, 2019, at Meyer Care Center in Higginsville, Missouri. Alfred was born Saturday, June 27, 1936 in Higginsville and was a lifelong resident of the Higginsville/Mayview area. He was the son of the late Carl Riekhof and the late Edna (Erdmann) Riekhof. Alfred married Betty Lou Amor on October 25, 1975 and she survives of the home. He was a 1955 graduate of Mayview High School and served in the Army National Guard after graduation. Alfred was a farmer and took great joy in being a good steward of the land. He was a member of Salem United Church of Christ, Higginsville and a long-time attendee of First Baptist Church, Mayview. Alfred was generous with his time and spent much of it in service to his community. He was a past president of Mayview Lions Club and a Melvin Jones Fellow of the Lions International Foundation. He was a past president of Lafayette County Farm Bureau and was active in the Lafayette County Cattlemen’s Association. He was an active supporter of the local and county 4-H, serving as a project leader and volunteer for many years. Surviving are his wife, Betty Lou (Amor) Riekhof of the home; one son, Wayne Riekhof and two grandchildren, Holden and Lucy Riekhof, all of Lincoln, NE; one brother, Ralph Riekhof of Springfield, MO. He was preceded in death by his parents, Carl and Edna Riekhof; and one brother, Kenneth Riekhof. The family will receive friends from 6:00 PM to 8:00 PM on Thursday, May 2, 2019, at the Hoefer Funeral Home Chapel, Higginsville. A funeral service will be held at 2:00 PM on Friday, May 3, 2019 at Mayview First Baptist Church located at 109 Marshall St. Mayview, Missouri 64071 with the Rev. Jesse Barnhart officiating. Interment will follow in the City Cemetery, Higginsville. Casket bearers: Harold Bertz, David Magruder, Greg Bertz, Tim Barnes, David Salyer, Seth Philipps, Kaleb Jones, Bob Barnes. Honorary bearers: Ronnie Hawthorne, Kent Corbin, Mike Hemme. Memorials may be made to the Mayview Lions Club.

Alfred Russell Riekhof, 82 of Mayview, Missouri died on Saturday, April 27, 2019, at Meyer Care Center in Higginsville, Missouri. Alfred was born Saturday, June 27, 1936 in Higginsville and was a lifelong resident of the Higginsville/Mayview... View Obituary & Service Information

The family of Alfred R. Riekhof created this Life Tributes page to make it easy to share your memories.

Send flowers to the Riekhof family.