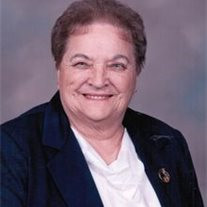 Anna Lea Brown, age 90 of Higginsville, Missouri died on Wednesday, February 15, 2012, at Lafayette Regional Health Center in Lexington, Missouri. Born Saturday, December 3, 1921 in Ridgeway, Missouri, she was the daughter of the late Orville Bert Price and the late Mary Ardell Miller Price. She married Louis John Jungeblut January 25, 1939. She was then married to James F. brown September 13, 1963. He preceded her in death August 1990. Also preceded in death is one brother, Orville Price, Jr.; one sister: Maxine Cordle; and two grandchildren, Teresa Genser and Austin Beck. Anna attended the Ridgeway public school. She joined the Ridgeway Methodist Church in the summer of 1933. Anna worked most of her life. Her first job was at the Higginsville Laundry for 10 cents an hour. She worked at the International Shoe Factory and the Garment Factory in Higginsville. The war broke out in 1941 and she worked at Lake City until the war ended in 1945. She was called back to work at Lake City in the 1950's until she opened her own beauty salon. She owned and operated the Ideal Beauty Shop in Higginsville before moving to Corder where she owned and operated Ann's Kut and Kurl. She lived in Corder from 1971 until 1991 when she moved back to Higginsville. She was a graduate of Molar School of Cosmetology. She was a member of Young At Heart's Club of Corder, and Corder United Methodist Church, where she taught the adult Sunday School class. Surviving are one son, John (Cheryl) Jungeblut, Jr. of Higginsville, Missouri, one daughter, Barbara (Bob) Beck of Higginsville, Missouri,two brothers, Larry (Donna) Price of Lamoni, Iowa and Gary (Georgia) Price of Odessa, Missouri; two sisters, Mary Lou Tosland and Kay Toms, both of Mountain Grove, Missouri; 6 grandchildren; 21 great grandchildren and 4 great great grandchildren. A Funeral service will be at 2:00 P.M. on Saturday, February 18, 2012 at the Corder United Methodist Church with the Rev. Nick Kindred officiating, Janet Carroll, pianist, and Patricia Holtcamp, vocalist. Interment will be in Calvary Cemetery, Corder, Missouri. The family will receive friends from 1:00 PM to 2:00 PM on Saturday at the Church. Memorial contributions may be sent to Corder United Methodist Church. Casketbearers are John Jungeblut, III, Ron Jungeblut, Brian Beck, Joey Beck, Sterling Wahn, and Chase Genser. Online condolences may be made to the family at www.hoeferfuneralhome.com

The family of Anna Lea Brown created this Life Tributes page to make it easy to share your memories.

Send flowers to the Brown family.