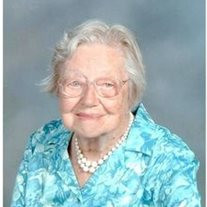 Anna Marie Jungerman, 97 of Crockett, Texas, formerly of Odessa, Missouri died on Thursday, March 18, 2010, at Houston County Nursing Home in Crockett, Texas. Born Wednesday, October 30, 1912 in Mayview, Missouri, she was the daughter of the late John Sander and the late Minnie Rabius Sander. Anna Marie was a member of Zion United Church of Christ, Mayview. She was a former member of the Women's Fellowship of the Church and a 1931 graduate of Odessa High School. She lived most of her life in rural Odessa, Missouri, moving to Texas in 2006. Anna Marie married Clarence A. Jungerman June 26, 1932. He preceded her in death November 6, 1998. Also preceded in death is a brother, William Sander. She was a homemaker and was well known for the wonderful pies she baked, including the pies served at Hillcrest Restaurant, located at the intersection of I-70 and M Highway. She loved sewing, handiwork and quilting, even continuing her handiwork after suffering a stroke. She also mowed her own lawn after the death of her husband in 1998. Surviving are a son, Harvey Jungerman & Wife Donna of Mayview; and daughter, Dorothy Fulton & Husband John of Grapeland, Texas; five grandchildren, Pat Short & Husband Jon; Tim Dighton & Wife Kelli, David Jungerman & Wife Penny; Matt Begemann & Wife Glenda; and Chris Begemann & Wife Julie; and nine great grandchildren. The Funeral Service will be Thursday, March 25, 2010 at 11:00 a.m. at Zion United Church, Mayview, Missouri with Rev. Robert Atkinson officiating and Dorothy Begemann as organist. Friends may call Wednesday evening after 7:00 p.m. at Hoefer Funeral Home, Higginsville. Burial will be in Zion Cemetery, Mayview. Memorial contributions may be sent to Zion United Church of Christ or Show Me Christian Youth Home, LaMonte, Missouri. Pallbearers include Matt Begemann, Chris Begemann, David Jungerman, Kenneth Jungerman, Lee Smith, and Tim Dighton. Arrangements: Hoefer Funeral Home. Online condolences may be made to the family at www.hoeferfuneralhome.com

The family of Anna Marie Jungerman created this Life Tributes page to make it easy to share your memories.

Send flowers to the Jungerman family.