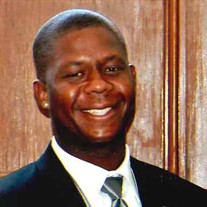 Antonio Antwuan Elmore, 41 of Independence, Missouri passed away unexpectedly in his sleep on Wednesday, February 9, 2022, at his home. He was born Saturday, February 23, 1980 in Warrensburg, Missouri, to the late Floyd Elmore and Sherry (Fields) Elmore. Antonio was a 1998 graduate of Lafayette Co C-1 High School in Higginsville, where he excelled in football, basketball, and baseball. He went on to further his education and play football at Missouri Valley College in Marshall, Missouri. In 2001 he moved to Kansas City, Missouri. Antonio spent the last 20 years as a working member of the Construction and General Laborers Local Union 1290. In 2017, he started his own construction company, Final Touch, where he was skilled in doing concrete and landscaping projects. In his spare time, he enjoyed working on his classic Chevy Caprice and was an avid golfer. Antonio loved his family and cherished his time with them. He enjoyed family gatherings and dinners. He loved his children and was happy just being their dad. Antonio will be greatly missed by all his friends and family. Surviving are two sons, Rhys Brinkman and Reagan Elmore of Independence; his mother, Sherry Elmore of Kansas City; one brother, Floyd Lavelle Elmore of Independence; one grandmother, Mable Jackson of Kansas City; one grandfather, David Collins of Grand Forks, ND; two nieces, Elise and Elena Elmore; a host of cousins, aunts, uncles and extended family. The family will receive friends from 11:00 AM to 1:00 PM on Saturday, February 26, 2022, at Salem United Church of Christ located at 1500 N. Main St. Higginsville, Missouri. A funeral service will follow at 1:00 PM at the church with Rev. Glen and Evelyn Elmore officiating. Interment will follow the service in the Higginsville City Cemetery. Repast will be held at the Benton Hall after interment. Casket Bearers: Dustin Elmore, Michael Elmore, Nick Faught, Brandon Haynes, Aaron Smith, Dustin White, David Williams, Derrick Williams, James Williams. Memorial contributions may be made out to Sherry Elmore, to go towards funeral expenses.

Antonio Antwuan Elmore, 41 of Independence, Missouri passed away unexpectedly in his sleep on Wednesday, February 9, 2022, at his home. He was born Saturday, February 23, 1980 in Warrensburg, Missouri, to the late Floyd Elmore and Sherry (Fields)... View Obituary & Service Information

The family of Antonio Elmore created this Life Tributes page to make it easy to share your memories.

Send flowers to the Elmore family.