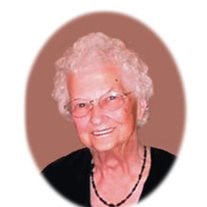 Arisa Tattershall Newland, age 92 of Overland Park, Kansas, formerly of Higginsville, Missouri, died on Tuesday, January 27, 2015, at Prairie Elder Care in Overland Park. Born Saturday, October 28, 1922 in Hamilton, Missouri, she was the daughter of the late Charles Houghton Tattershall and the late Mary (Alexander) Tattershall. Arisa and Winfred E. Newland were united in marriage October 8, 1950. He preceded her in death October 8, 2008. She was a member of First Assembly of God Church in Higginsville, National Association of Retired Federal Employees and the Ladies Auxiliary of Grandview V.F.W. Post. Mrs. Newland was employed as a secretary for the Department of Agriculture, then Department of Health and Human Services in Kansas City, Missouri retiring in 1984. She then worked at Central Missouri State University for two years, and then at the Higginsville Habilitation Center five years. She lived in Kansas City, then Higginsville before moving to Overland Park in 2014. Surviving are one son, Charles Houghton (Rosanne) Newland of Higginsville; one daughter, Charisa Newland of Excelsior Springs, Missouri; four brothers, William (Elise) Tattershall of Camdenton, Missouri, Linden Dean (Darlene) Tattershall of Odessa, Missouri, Rex (Boneva) Tattershall of Lee's Summit, Missouri, Frank (Jan) Werner of Lee's Summit; two grandchildren, Leann Newland, Michael (Jamie) Newland; and one great-grandson, Lucas Newland. A Funeral service will be at 1:00 P.M. on Friday, January 30, 2015 at Hoefer Chapel, 1600 Main St. Higginsville with Rev. Dan Mahurin officiating. Interment will be in Missouri State Veterans Cemetery, Higginsville. The family will receive friends from 12:00 P.M. to 1:00 P.M. on Friday prior to the service. Memorial contributions may be made to First Assembly of God Church in Higginsville or Wayside Waifs Pallbearers are nephews. Online condolences may be made to the family at www.hoeferfuneralhome.com

The family of Arisa Tattershall Newland created this Life Tributes page to make it easy to share your memories.

Send flowers to the Newland family.