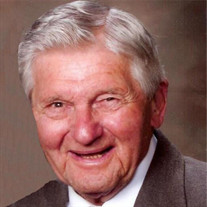 Arnold Lee Klever, 95 of Higginsville, Missouri passed away on Monday, October 26, 2020, at the Good Shepherd Lutheran Nursing Home in Concordia. He was born Wednesday, June 3, 1925 in Audubon, Iowa, and was the son of the late Walter Klever and the late Rosa (Wright) Klever. He was the husband of the late Iva Jean (Cole) Klever, marrying October 12, 1951. She preceded him in death on August 27, 2019. Arnold grew up on a farm in Iowa and graduated from Jessup High School in Jessup, Iowa. Arnold enlisted in the United States Army and served his country proudly. After serving his country he attended the Electronic Institute in Kansas City and moved to Colorado. He worked for Martin Missiles in Denver for 9 years before he and Iva Jean moved to Higginsville in 1969. He took a position as a salesman, selling hearing aids. Arnold finished his last fifteen working years as a safety inspector for workman compensation firms. While in the Higginsville area, he was a faithful member of Grace United Methodist Church. In his free time, Arnold enjoyed their cabin at the lake, fishing, and relaxing on the pontoon boat. Arnold was known to spend a peaceful day working in the yard. He loved family gatherings and events. Family was everything to Arnold. He was especially joyful during the holidays when he was with family often. He will be sorely missed by family and all who came to know him. Surviving are one daughter, Susan Starke of Higginsville; two grandchildren, Bryan (Anna) Starke of Olathe, KS and Sabra (Bill) McDowell of Lawson, MO; five great-grandchildren, Brennan, Charlotte, Zoey, Avery, and Ethan. He was preceded in death by his parents; wife, Iva Jean Klever; one son, Daniel Klever; one sister, Irma Williams. A private family only, graveside service with military honors will be held at the Missouri Veterans Cemetery with burial following. Memorials may be made to Grace United Methodist Church.

Arnold Lee Klever, 95 of Higginsville, Missouri passed away on Monday, October 26, 2020, at the Good Shepherd Lutheran Nursing Home in Concordia. He was born Wednesday, June 3, 1925 in Audubon, Iowa, and was the son of the late Walter Klever... View Obituary & Service Information

The family of Arnold Klever created this Life Tributes page to make it easy to share your memories.

Arnold Lee Klever, 95 of Higginsville, Missouri passed away on...

Send flowers to the Klever family.