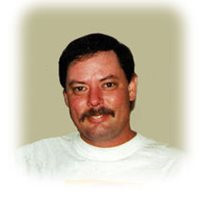 August A. "Auggie" Burns, age 49 of Higginsville, Missouri died on Friday, May 24, 2013, at Cancer Treatment Centers of America in Tulsa, Oklahoma. Born Tuesday, September 24, 1963 in Kansas City, Missouri, he was the son of August A. Burns, Jr. and Shirley Sue Kennedy. He married Pamela (Bell) Simpson on November 26, 2003. Mr. Burns worked as a maintenance man for Baler Service in Grandview, Missouri and was a resident of Higginsville for the past 25 years. He became an Eagle Scout at the age of 13. A collector of record albums, he was a lover of music and his hobbies also included fishing and hunting. Those family members preceding him in death are his father, and one brother, Brian Burns. Surviving are his mother, Shirley S. (Dennis) Moore of Harrison Arkansas; his wife, Pam Burns of the home in Higgisnville; one son, August A. Burns IV of Adrain, Missouri, one daughter, Samantha Burns of Kansas City, Missouri; one brother, David (Marie) Burns of Olathe, Kansas; two sisters, Diana (Dave) Jackson of Corder, Missouri, Linda (Randy) Julien of Warrensburg, Missouri; one step-son, Christoffer Simpson of Warrensburg and one step-daughter, Nichole Simpson of Higginsville. A Graveside service will be held at 10:30 A.M. on Friday, May 31, 2013 at the Oak Grove Community Cemetery south of Higginsville with Pastor Betty Thaller officiating and Steve Williams as guitarist. Interment will follow the service. The family will receive friends from 9:15 A.M. to 10:15 A.M. on Friday prior to the service at Hoefer Funeral Home, 1600 Main St., Higginsville. The Family suggests Memorial contributions to Cancer Treatment Centers of America. Casketbearers are Dave Jackson, Randy Julien, Chris Simpson, Curtis Vogt, Tim Jackson and David Burns. Online condolences may be made to the family at www.hoeferfuneralhome.com

August A. "Auggie" Burns, age 49 of Higginsville, Missouri died on Friday, May 24, 2013, at Cancer Treatment Centers of America in Tulsa, Oklahoma. Born Tuesday, September 24, 1963 in Kansas City, Missouri, he was the son of August A. Burns,... View Obituary & Service Information

The family of August A. "Auggie" Burns created this Life Tributes page to make it easy to share your memories.