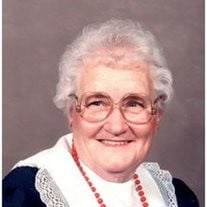 Bennie "Grandma B" Schnakenberg, age 89 of Corder, Missouri died on Saturday, November 20, 2010, at her home. Born Wednesday, November 9, 1921 in Emma, Missouri, she was the daughter of the late Benjamin Thieman and the late Bertha Dyer Thieman.... View Obituary & Service Information

The family of Bennie "Grandma B" Schnakenberg created this Life Tributes page to make it easy to share your memories.

Send flowers to the B" Schnakenberg family.