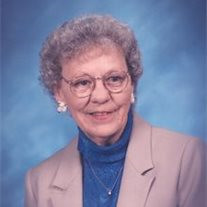 Bernice Gassen Smith, age 85 of Overland Park, Kansas, formerly of Raytown, Missouri died on Tuesday, March 8, 2011, at Bickford of Overland Park. Born Wednesday, January 13, 1926 in Montrose, Missouri, she was the daughter of Joseph Gassen & Catherine Vogel Gassen. She married Dean I. Smith February 15, 1947. He preceded her in death October 31, 1996. Also preceded in death are her parents, one brother Eugene Gassen & one sister, Rita Marie Gassen. Bernice worked as a cashier/hostess at Leonard's restaurant in Kansas City, Missouri until her retirement in 1992. She lived in Raytown, Missouri for 53 years, moving to Overland Park in 2009. She was a member of Our Lady of Lourdes Catholic Church in Raytown & a 1943 graduate of Higginsville High School. Surviving are one daughter, Mary Kay (Delbert) Hilt of Kansas City, Kansas; brothers, Fred Gassen of Higginsville, Missouri, & Dan (Rosanne) Gassen of Raymore, Missouri; one grandson, Aaron Bevell; two great grandchildren, Alexandra Bevell & Christian Bevell. A Mass of Christian Burial will be held at 10:30 A.M. on Saturday, March 12, 2011 at St. Mary's Catholic Church, 401 W. Broadway, Higginsville, with the Father Thomas Hawkins officiating. Interment will be in St. Mary's Catholic Cemetery,Higginsville. The family will receive friends from 9:30 A.M. to 10:30 A.M. on Saturday at the Church.Memorial contributions may be sent to Little Sisters of the Poor, 8745 James A. Reed Rd. Raytown, Missouri 64138. Online condolences may be made to the family at www.hoeferfuneralhome.com

The family of Bernice Gassen Smith created this Life Tributes page to make it easy to share your memories.