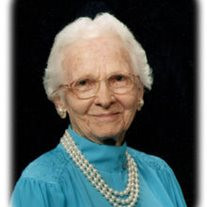 Bernice Young, age 100, of Higginsville, Missouri died on Tuesday, January 14, 2014, at Meyer Care Center in Higginsville. Born Monday, August 25, 1913 in Hodge, Missouri, she was the daughter of the late Jesse Whitfield Edwards and the late Zillah (Branch) Edwards. She was united in marriage to George N. Young on Saturday, August 8, 1942. He preceded her in death Friday, March 21, 1975. Also preceded in death are three brothers, Clark Neale Edwards, David Whitfield Edwards and Charles Jesse Edwards. After graduating from Lexington High School, she attended Park College where she received her Bachelor of Arts Degree. Mrs. Young worked as an elementary school teacher at Lexington, Mayview and Concordia, Missouri retiring in 1975. She moved to a farm west of Higginsville in 1942 and was a member of First Presbyterian Church where she served as a church deacon, Sunday school superintendent, a member of the women's organization of the church, and a member of the church choir, often singing solos. She was also a former member of the Prairie Homemakers Club in Higginsville, the Higginsville Federated Women's Club and the National and State Teachers Associations. Following her husband's death in 1975, she moved to John Knox Village, which had just opened. While living there, she was an active volunteer and resident. Surviving are two sons, Charles N. (Pam) Young of Chattanooga, Tennessee and David B. (Judy) Young of Windsor, Missouri, four grandchildren, eleven great-grandchildren, and several nieces and nephews. A Funeral service will be at 10:30 A.M. on Saturday, January 18, 2014, at the First Presbyterian Church, 111 Fairground Ave. Higginsville, with Rev. Jay Kim officiating and Melody Coen as organist. Interment will be in the Higginsville City Cemetery. The family will receive friends from 9:30 A.M. to 10:30 A.M. on Saturday prior to the service at the church. Suggested Memorials in lieu of flowers are to the First Presbyterian Church or Crossroads Hospice. Pallbearers are Scott Young, Paul Young, Jill Hamming, Alan Bear, Jimmy Young, and W.N. Gray. Online condolences may be made to the family at www.hoeferfuneralhome.com

Bernice Young, age 100, of Higginsville, Missouri died on Tuesday, January 14, 2014, at Meyer Care Center in Higginsville. Born Monday, August 25, 1913 in Hodge, Missouri, she was the daughter of the late Jesse Whitfield Edwards and the late... View Obituary & Service Information

The family of Bernice Young created this Life Tributes page to make it easy to share your memories.

Send flowers to the Young family.