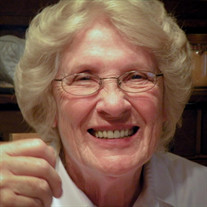 Betty June Baker (Chambers), 88 of Waverly, Missouri passed away unexpectedly on Tuesday, February 15, 2022, at her home. She was born Tuesday, April 18, 1933 in Falls City, Nebraska and was the daughter of the late Earl Chambers and the late Adna (Price) Chambers. She met the love of her life, Melvin Baker when she was 12 years old and they were married October 3, 1952. They enjoy traveling to Colorado with their children and grandchildren. Betty enjoyed working with her hands and was proud of her time working for Remington (now Lake City) and Bendix as a tool setter. She was happiest outdoors. She liked going for walks in the woods, mowing her property and playing with her dogs. Some of Betty's fondest memories were trips she had taken with family. She enjoyed talking with Kim about their mutual love for animals. Betty loved her family and enjoyed spending time with her children and grandchildren. She loved being active, chopping fire wood with her son, taking care of her property, watching the deer play on her property, and just being able to enjoy nature outside. Surviving are son, Loyd (Joan) Baker of Dover, MO; 2 daughters, Melody (Wade) Noland and Kimberly (David) Libby of Higginsville; 9 grandchildren, Alycia (Jason) Jiskra, Devin Baker (Kelly Gaither), Brian Taylor, Michael (Jennifer) Taylor, Angela Portell, Christine (Michael) Nicewander, Melanie (Wayne) Shoudt, Michael (Mary) Harmon, Alex Hayden; 20 great-grandchildren; and 9 great-great-grandchildren. She was preceded in death by her husband, Melvin Baker; her parents; 4 brothers, Earl Chambers, Lee Chambers, Loyd Chambers, Robert Chambers; 3 sisters, Alice Llewellyn, Ethel Roberts and Naomi Dowell. There are no services scheduled at this time but a celebration of Life will be scheduled at a later date. Memorials may be made in lieu of flowers to the Friends of the Friendless Animal Rescue, Lexington, MO.

Betty June Baker (Chambers), 88 of Waverly, Missouri passed away unexpectedly on Tuesday, February 15, 2022, at her home. She was born Tuesday, April 18, 1933 in Falls City, Nebraska and was the daughter of the late Earl Chambers and the late... View Obituary & Service Information

The family of Betty Baker created this Life Tributes page to make it easy to share your memories.

Send flowers to the Baker family.