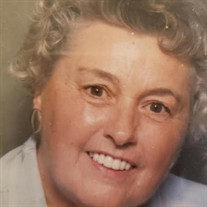 Betty rejoined the love of her life, Kenneth in a Heavenly reunion. She passed peacefully on January 29, 2022. Betty was born July 19, 1935 to John “Jack” and Elizabeth (Doak) Peacock in Higginsville, MO. Betty was an only child. She started her education in a one room school house - The Peacock School. She finished her education at Kansas City Business College. After that, she went to work at National Bank in KC, MO. Kenneth was a major part of her life for 60+ years. After his stint in the Korean War, they started their family. Family was very important to both. After working at the bank for 10 years, she was impressed to buy the Dairy “B” drive inn. She put all three of her older children to work. She always said “Remember your work schedule comes before your social life”. It was part of their life for 10 years along with Mendenhall Catering which grew to be the third largest in KC, MO. She moved down on Swift to expand the catering and open Betterway Christian Supper Club. There was another 10 years. After the club, she moved to her final location on the Square in Independence, MO. There she continued the catering and promoted her Jelly and Jam business called, Blessing Times, which she recruited her youngest daughter to help with. She held a lot of accolades in her lifetime but her family was ranked the highest. In her lifetime, she was President of the P.T.A in 1974. She was named in Who’s Who in Missouri in 1974. She was named women of the year from the Modern Woodmen of America in 1980. After moving to Independence, she was President of the Square Association for two years in the 1990’s. She was a member of the Daughters of the American Revolution and Missouri Historical Society. She was a Sunday school teacher and the Treasurer of the Corder Baptist Church in 2002. She and Kenneth decided to go back to the farm and retire where they raised Angus cattle and enjoyed each other in the community where it all began. Her best reward was watching her grandchildren grow up on that farm. She was pure sugar to her grandchildren; all they had to do was ask and she melted. Shalaine Vaughan was the oldest and named her “Ma”, and it stuck, next came twin boys, Jerrod & David Vaughan, and then came Jessie, Sabrina and Kenneth Luke Mendenhall. Next were Margo’s two girls, Autumn & Ashton Stotts. She lived to enjoy her great grandchildren too. They were all a blessing to her life. God has been good through all her difficulties, all of her flaws, but she stood tall. She leaves behind her two daughters, Mary Vaughan and husband, Sean; and Marsha Mendenhall and husband, Mike Markham. She lost their only son, Kenneth Eugene Mendenhall in 1992. He was her rock. She lost her youngest daughter, Margo Stotts in 2014. Part of her soul died with Margo. She lost her beloved husband, Kenneth in 2017, so it was time to join them. The family will receive friends from 12PM-1PM on Saturday, February 5, 2022 at the Corder Baptist Church located at 301 N. Main St. Corder, MO 64021. A funeral service will follow at 1PM at the church with Rev. Gary Vanlanker officiating. Burial will follow in the Calvary Cemetery. Casket Bearers: Jerrod Vaughan, David Vaughan, Jessie Mendenhall, Kenneth Luke Mendenhall, Trenton Vaughan, Kenneth Kane Vaughan, Sean Vaughan, Mike Markham. Memorial contributions may be made out to the Corder First Baptist Church.

Betty rejoined the love of her life, Kenneth in a Heavenly reunion. She passed peacefully on January 29, 2022. Betty was born July 19, 1935 to John &#8220;Jack&#8221; and Elizabeth (Doak) Peacock in Higginsville, MO. Betty was an only child.... View Obituary & Service Information

The family of Betty Mendenhall created this Life Tributes page to make it easy to share your memories.

Betty rejoined the love of her life, Kenneth in a Heavenly reunion....

Send flowers to the Mendenhall family.