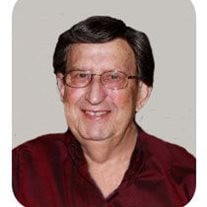 Bill Lacen, age 77 of Higginsville, Missouri died on Thursday, December 20, 2012, at his home. Born Saturday, May 25, 1935, he was the son of the late Harold Lacen and the late Mildred Gahman Lacen. He married Carole Lee Hood on September 26,... View Obituary & Service Information

The family of Bill Lacen created this Life Tributes page to make it easy to share your memories.

Send flowers to the Lacen family.