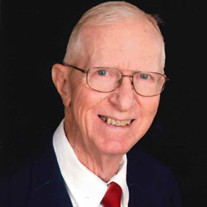 Billy Charles Rumsey, 86 of Higginsville, Missouri passed away on Monday, December 7, 2020, at Meyer Care Center in Higginsville. He was born in Salem, Missouri, on Friday, September 7, 1934, to Lois Irene Leonard and Benny Herbert Rumsey. He was raised in Sedalia and attended Horace Mann Elementary School and graduated from Smith Cotton High School in 1952. He served in the US Air Force from 1954 to 1956 during the Korean Conflict. He graduated from Central Missouri State College (now UCM) in 1959, with a BS Degree in Commercial Art. He worked as an artist at Hallmark Cards in Kansas City, and American Greeting Cards in Cleveland, Ohio. He was an avid reader and history buff. He married Al Beth Ritter on June 17, 1960. They moved to Higginsville in 1973. Bill retired from Wackenhut Security Co. at Lake City, in 1999. He leaves in his memory, wife, Al Beth, of the home; three sons, David (Susan) Rumsey of Columbia, Timothy Rumsey, of Higginsville, Daniel (Stacey) Rumsey of Higginsville; and five grandchildren, Katelyn, Calvin, Taylor, Rachel, and Mason Rumsey. A private graveside service will be held in the Missouri Veterans Cemetery with Rev. Terry Cook officiating. In lieu of flowers, memorials may be sent to Grace United Methodist Church or Crossroads Hospice.

The family of Bill Rumsey created this Life Tributes page to make it easy to share your memories.

Send flowers to the Rumsey family.