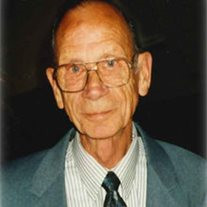 Billy Givens Anson, 87, of Warrensburg, Missouri died on Monday, March 16, 2015, at Missouri Veterans Home in Warrensburg. Born Tuesday, February 14, 1928 in Higginsville, Missouri, he was the son of the late Edward Mode Anson and the late Lillian (Sheets) Anson. He and Mary Alice Brown were united in marriage September 14, 1951. She preceded him in death. Mr. Anson joined the U.S. Army in 1951 serving during the Korean War. He earned the rank of Sergeant (T) and was honorably discharged in 1955. He worked as a construction technician and was in charge of quality control testing for the Kansas City District of the Army Corp of Engineers, retiring in 1983. Mr. Anson lived in Clinton, Missouri from 1979 until 2006 when he moved to Lee's Summit and lived until 2011. He then lived in Grain Valley, Missouri before moving to Warrensburg in 2014. He was a member of Central Christian Church and a former member of the Masonic Lodge. Preceded in death are one son, Curt Anson and one brother, Mode Anson. Surviving are two sons, Stuart (Jan) Anson of Lees Summit, MO and Bradley (Bobbe) Anson of Gardner, KS.; one sister, Judy (Jerry) Frerking of Marshall, MO; 9 grandchildren; 7 great grandchildren. A funeral service will be at 10:30 A.M. on Saturday, March 21, 2015 at Hoefer Chapel located at 1600 Main St. Higginsville with Rev. Dr. Tommy L. Faris officiating, Becky Reilly as organist and Holmes Osborne as vocalist. Interment will be in the City Cemetery, Higginsville. Pallbearers will be Neal Anson, Greg Anson, Branden Jewell, Aaron Anson, Joel Wilson, Charles Patrick and Matt Anson. Honorary pallbearers will be John Anson, Ed Anson, Joe Anson, Ray Sutherland, Mike Reilly and Danny Iman. The family will receive friends from 10:00 A.M. until the time of service on Saturday, March 21, 2015, at Hoefer Chapel. Memorial contributions may be sent to Missouri Veterans Home1300 Veterans Rd. Warrensburg, MO 64093. Online condolences may be made to the family at www.hoeferfuneralhome.com

Billy Givens Anson, 87, of Warrensburg, Missouri died on Monday, March 16, 2015, at Missouri Veterans Home in Warrensburg. Born Tuesday, February 14, 1928 in Higginsville, Missouri, he was the son of the late Edward Mode Anson and the late... View Obituary & Service Information

The family of Billy Givens Anson created this Life Tributes page to make it easy to share your memories.

Send flowers to the Anson family.