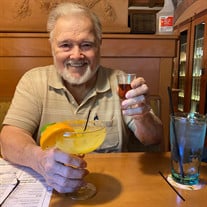 Robert Carol Hembree, “Bob”, 82 of Snellville, Georgia died July 4, 2021, peacefully amongst family in Higginsville, MO. Bob was the youngest of eight children of Marion and Ella Mae Hembree. Bob was born in Oklahoma where he met his sweetheart and wife, Janice Beecher. Bob and Janice had two children, daughter, Judith Michelle Hembree-Kimball and spouse, Robert Gerold Kimball with grandsons, Philip Robert Rossy and Sean Tyler Clarke; and his son whom he lived his final years with, Robert Chris Hembree and significant-other, Gail Ruth Alden, with grandson, Robert Cole Hembree. After the tragic death of his beloved wife Janice, he married Elvira Mary Marchione-Hembree. She preceded him in death as well on September 21, 2013. He was a loving and dedicated step-father of his wife’s surviving children, step-daughter, Susan Forte-DeJackmo and spouse, Benny DeJackmo; granddaughter, Nicole De Jackmo-Valentino and spouse, Dr. Michael Valentino; and grandson, Gerard Anthony DeJackmo and significant-other, Melanie Alberto; step-son, Joseph Forte and significant-other, Elizabeth Green. Bob had six great-grandchildren and many surviving cousins. One of Bob’s greatest achievements was his full baseball scholarship from University of Oklahoma (OU). Alumni’ 62 of OU College of Business earning a Bachelor of Business Administration in Business Management. Being an Oklahoma Sooner was dear to his heart! As catcher, he was a three-year letter winner under Coach Jack Baer. Bob enjoyed bringing his son, grandson, and other family members to homecoming. He indulged them with his reflections and memories on the field. Bob’s career began as an auditor with Swift and Company, and then Continental Can. His work moved Janice and his children around the country, living in Chicago, IL, Georgia, New Jersey, and often business travel took him to South America. After retiring, he returned to the workforce with Bergenfield Board of Education in Bergenfield, NJ. Bob’s interests lead him to establish a youth group as well as a softball team that he managed for many years with his Lutheran Church in Jackson, New Jersey. Judith Michelle and Robert Chris participated and appreciated their father’s involvement. Later years, he enjoyed playing a family game of golf, working with his hands building and fixing things, gardening, watching sports, and sharing life stories with family and friends. Bob’s final words, “I lived a great life, and I love you all.” Bob is survived as well by his adoring and loving sister, Patricia Ann O’Neil and spouse, Jerry O’Neil of Higginsville. Memorial Mass will be held on Saturday, August 14, 2021 at 1PM at Holy Trinity Lutheran Church 158 Vreeland Ave, Nutley, NJ 07110. Guests are asked to arrive early and wear masks. Mass maybe viewed via zoom. Chaplain's Programs Join Zoom Meeting https://us02web.zoom.us/j/88632353777?pwd=ejF1Umhabks4QnpwZjdSWUpmTVZwdz09 Meeting ID: 886 3235 3777 Passcode: 266766

Robert Carol Hembree, &#8220;Bob&#8221;, 82 of Snellville, Georgia died July 4, 2021, peacefully amongst family in Higginsville, MO. Bob was the youngest of eight children of Marion and Ella Mae Hembree. Bob was born in Oklahoma where he met... View Obituary & Service Information

The family of Bob Hembree created this Life Tributes page to make it easy to share your memories.

Send flowers to the Hembree family.