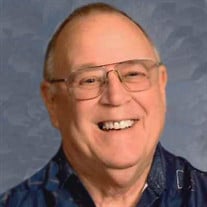 Robert "Bob" Kurt Pragman passed away April 24, 2020 at St. Luke’s Hospital from complications of COVID-19. Bob was born September 22, 1942 to the late Elmer Pragman and the late Evelyn Pragman (Huddelston) in Higginsville, MO. Bob lived in Corder until he graduated from Corder High School in 1960. He was a member of the Salem United Church of Christ in Higginsville. After high school he moved to Kansas City while working for Hallmark cards. He moved back to Corder where he started driving a gas truck for Irvin Kleinschmidt which he greatly enjoyed. Bob joined the Army National Guard from 1964-1970 and he married Peggy (Ridder) Pragman on June 13, 1965; she survives of the home. After his service he started a position with the Lake City Ammunition Plant where he worked in the printing department and this started his life in the printing industry. After being laid off he returned to Higginsville and started working for Bill Butts at the Higginsville Advance. In 1975 he went to work at Burd and Fletcher Printing in Kansas City. In 1976 he became an Honorary Member of the Graphic Communications Conference International Brotherhood of Teamsters. Bob worked here until the plant was shut down and then continued his profession at Jefferson Smurfit in North Kansas City. He continued working there until he suffered a stroke on December 23, 2004 which led to his retirement. Bob's passions were his love of cars and Elvis Presley. He became a very avid drag racing competitor. Earlier in his life he and 4 other buddies were known as the fearless five among local residents of Corder. He also enjoyed fishing, hunting, bowling, and working on cars. Later in life he enjoyed traveling, especially to Las Vegas. He loved going to the casinos, seeing all the lights, attending shows, and being with family and friends. Surviving are his wife, Peggy Pragman of the home; nephew, Kurt (Johnna) Lorenz; great-nephew, Brandon Lorenz and great-niece, Morgann Lorenz all of Odessa. Niece, Shannon (Dean) Love of Fulton, MO; great-nephew Joshua Gassen and two great-great nephews, Avery and Oliver Gassen, all of Belton. Sister-in-law, Emika Pragman of Higginsville; sister-in-law and brother in-law, Sue and Jerry Garrett of Joplin, MO; nephew, Bradley Garrett of Mansfield, TX; great-niece, Hailey Garrett of Columbia, MO; great-niece and great-nephew, Chloey and Zachary Garrett both of Arlington, TX; nephew, Brett (Megan) Garrett of Marshfield, MO; nephew and niece, Alvin Ridder Jr. and Mary Ellen Golt both of Great Falls, MT. Great-nephews, A.J. (Liz) Golt of Brunswick, NJ and Will (Luisa) Golt of Great Falls, MT; two great-great nephews, Johnathan and James Golt of Great Falls, MT; one aunt, Flo Huddleston of Independence, MO; many cousins and friends; five special kids that always called him “Papa Bob”, Andrew and Jordan Novotny, and Katie, Lauryn, and Caroline Schumaker. Those that proceded him in death were his parents; sister and brother-in-law, Joyce and Don Lorenz; niece, Stacia Donn Lorenz; brother, Don Pragman; brother-in-law, Alvin Ridder Sr; two nieces, Rose Walker and Peggy Steed; and great-nephew, Z.J. Gassen. A Celebration of Bob’s Life will be held Saturday, April 24, 2021 at 2:30PM with a visitation one hour prior at Salem United Church of Christ in Higginsville. Burial will follow in the Calvary Cemetery with full military honors. Memorials may be made out to Salem United Church of Christ. Honorary Bearers: Gary Bauer, Greg Lorenz, Ray Don Paul, Dennis "Pepper" Hill, Jamie Schumaker.

The family of Bob Pragman created this Life Tributes page to make it easy to share your memories.