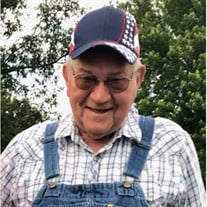 Robert "Bob" Lee Soendker, 84 of Mayview, Missouri passed away on Wednesday, October 28, 2020, at his home. He was born Tuesday, January 21, 1936 in Odessa, Missouri. He was the son of the late Wesley Soendker and the late Mary (Baker) Soendker. He was the husband of the late Arlene (Schumaker) Soendker. She preceded him in death on June 28, 1980. Bob left school early to help his father with the family farm. Helping on the family farm led to a lifelong passion for farming. He was at peace on the farm, whether it was working in the fields, with his horses or working on tractors. Bob enjoyed rebuilding antique tractors and displaying them in parades. Bob also enjoyed working with his horses. He had Clydesdales and Percherons. He rode in many parades and even in the American Royal Parade. When Bob wasn't on the farm he enjoyed going to country western dances with friends. He was a member of the Mount Tabor Methodist Church in Odessa. Surviving are his good friend and companion, Pat Tunnell of the home; three sons, Scott (Sally) Soendker of Windsor, MO, Michael Soendker of Mayview, MO and Jeffrey Soendker of Warsaw, MO; three brothers, Calvin (Jeanne) Soendker of Higginsville, MO, Larry (Linda) Soendker of Mayview, and Dennis (Monica) Soendker of Lexington, MO; two sisters, Esther (Kenneth) Dieckmann of Napoleon, MO and Janice (Richard) Jenkins of Lee's Summit, MO, grandchildren and great-grandchildren. He is preceded in death by his parents; wife, Arlene Soendker; four brothers, Wesley Soendker Jr., Carl Soendker, Lawrence Soendker, Delbert Soendker; two sisters, Wahneta Bell, Helen Diestelkamp; and one granddaughter. A Celebration of Life with burial, will be held at a later date in the Higginsville City Cemetery. Memorial contributions may be made to Mt. Tabor Methodist Church or Elara Caring, and mailed to Hoefer Funeral Home 1600 Main St. Higginsville, MO 64037.

Robert "Bob" Lee Soendker, 84 of Mayview, Missouri passed away on Wednesday, October 28, 2020, at his home. He was born Tuesday, January 21, 1936 in Odessa, Missouri. He was the son of the late Wesley Soendker and the late Mary (Baker) Soendker.... View Obituary & Service Information

The family of Bob Soendker created this Life Tributes page to make it easy to share your memories.

Send flowers to the Soendker family.