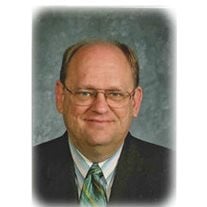 Rev. Brett L. Mueller, age 55 of Corder, Missouri died on Saturday, January 17, 2015, at his home. Born Tuesday, February 3, 1959 in St. Louis, Missouri, he was the son of the late Leslie Richard Mueller and the late Audrey Esther (Clare) Mueller. He and Linda Gayle Soendker were united in marriage September 4, 2010. Rev. Mueller attended high school in St. Louis, Missouri and was a 1977 graduate of Jennings High School. He received a Bachelor of Science degree in Communications from the University of Missouri-St. Louis and then a Masters of Divinity in 1993 from Concordia Seminary of St. Louis, Missouri. Previously, he served five years at Calvary Lutheran Church in Kansas City, Missouri and moved to Corder in 1997 where he served a dual parish as Minister at Zion Lutheran Church in Corder and Immanuel Lutheran Church in Waverly, Missouri for the past 17 years. A member of Zion Lutheran Church, he was also a member of the Corder Lions Club and Sons of the American Revolution. Surviving are his wife, Linda Mueller of the home in Corder; one son, Justin of Forsyth, Missouri; one daughter, Nicky of the home in Corder; and one brother, Dale Mueller of St. Charles, Missouri. A Funeral service will be at 10:30 A.M. on Wednesday, January 21, 2015 at Zion Lutheran Church, 500 N. Elizabeth St. Corder with Pastor Marcus Jauss officiating and Mary Frerking as organist. Interment will be in Zion Lutheran Cemetery, Corder. The family will receive friends from 6:00 P.M. to 8:00 P.M. on Tuesday at the Church. In lieu of flowers, the Family suggests Memorials to Immanuel Lutheran School Tuition Assistance Fund or Immanuel Waverly Scholarship Fund. Pallbearers are Michael Sanders, Brian Alexander, Erich Soendker, Brandon Fahrmeier, Ray Linebach, Bob Aversman and Craig Busseau. Online condolences may be made to the family at www.hoeferfuneralhome.com

The family of Rev. Brett L. Mueller created this Life Tributes page to make it easy to share your memories.

Send flowers to the Mueller family.