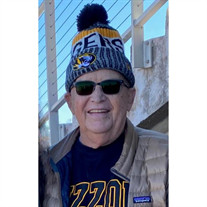 Stanley Bruce Morgan, age 77, of Higginsville, MO, passed away Saturday, March 13, 2021, at Centerpoint Medical Center in Independence, MO. He was the son of the late Orville Morgan and the late Garnet Niemeier. He married Judy Waterman on Feb. 15, 1964 and she preceded him in death on July 20, 2015. Bruce enlisted in the United States Air Force on Feb. 15, 1966 in Lexington, MO and served his country proudly. He attained many citations including Rifle M16A1 Expert, State Emergency Ribbon 3rd Awd, and Long Service Medal 10yr. He was a member of the American Legion Post #223 in Higginsville. Bruce's life was very full. He was a family man and enjoyed spending time with family. He never missed a sporting or school activity for his grandchildren. You would always see him cheering them on from the stands. Bruce worked for Hunter Industries as a salesman in their water irrigation division. He retired in 2015 as a Team Leader - Rocky Mountain/Midwest Region. He did extensive traveling with many clients during his career and considered all of them as family. He even visited many of them after retirement. He was an avid MU fan, loved riding motorcycles, playing golf, traveling, and always being there for family and friends. Bruce will be sorely missed by his family, friends and his community. He is survived by his beloved dog, Doodle; two daughters, Marnie (Dan) Oetting of Higginsville, Hali Morgan (Ben Unruh) of Kansas City, MO; one brother, Rocky (Taffy) Morgan of Lexington, MO; two grandchildren, Carson Oetting and Riley Oetting both of Higginsville. A graveside service with full military honors will be held at the Missouri Veterans Cemetery at 12:00 PM, Friday, March 19, 2021. Inurnment will follow in the columbarium wall. Memorials may be made to the Higginsville Food Pantry or the University of Missouri Athletics/Cheerleading Program.

Stanley Bruce Morgan, age 77, of Higginsville, MO, passed away Saturday, March 13, 2021, at Centerpoint Medical Center in Independence, MO. He was the son of the late Orville Morgan and the late Garnet Niemeier. He married Judy Waterman on Feb.... View Obituary & Service Information

The family of Bruce Morgan created this Life Tributes page to make it easy to share your memories.

Send flowers to the Morgan family.