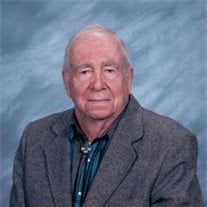 Cameron Y. Haston, age 84 of Independence, Missouri died on Sunday, February 13, 2011, at Sunrise Senior Living in Lenexa, Kansas. Born Sunday, June 6, 1926 in Higginsville, Missouri where he was raised, he was the son of Norman Haston & Elizabeth Young Haston. He married Rosemary Redford March 6, 1948. She preceded him in death June 15, 1990. Also preceded in death is one brother, Frank Haston; one sister Margaret Snider & one grandson. After graduation from the Admiral Billard Academy in 1942, Cameron served in the U.S. Army. He worked as a lineman in rural Oklahoma & Kansas before taking a job as an electrician with Standard Oil in Sugar Creek, Missouri, where he worked for nine years. He spent the remaining 30 years of his career at Bendix Corporation, retiring in 1990. He lived most of his life in Independece, Missouri, moving to Lenexa in 2006. He was a member of First Presbyterian Church, Independence & the VFW in Independence, an over 50-year member of Higginsville Masonic Lodge & a member of Tribe of Mic-O-Say. Also a Shriner, Cameron was a transport team member for the Shriner's Hospital for Children in St. Louis after his retirement. Surviving are one son, Mark (Darla) Haston of Lenexa, KS, daughter, Jane (Jim) Norris of Kansas City, MO; 4 grandchildren; 1 great grandson. A Graveside service will be at 2:15 P.M. on Thursday, February 17, 2011 at City Cemetery, Higginsville with the Rev. Dr. Tom Thomas officiating. The family will receive friends from 1:00 P.M. to 2:00 P.M. on Thursday at Hoefer Funeral Home, 1600 Main St., Higginsville, Missouri. In lieu of flowers, the Family suggests contributions to the Masonic Lodge of Higginsville. Pallbearers are Russ Crafton, Nick Winston, Jim Norris, Marc Wheeler and Hannah Wheeler. Online condolences may be made to the family at www.hoeferfuneralhome.com

Cameron Y. Haston, age 84 of Independence, Missouri died on Sunday, February 13, 2011, at Sunrise Senior Living in Lenexa, Kansas. Born Sunday, June 6, 1926 in Higginsville, Missouri where he was raised, he was the son of Norman Haston & Elizabeth... View Obituary & Service Information

The family of Cameron Y. Haston created this Life Tributes page to make it easy to share your memories.

Send flowers to the Haston family.