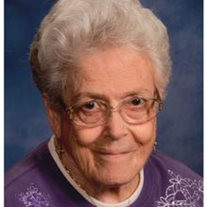 Carolyn F. Hostetter, age 77 of Marshall, Missouri died on Thursday, February 23, 2017, at her home. Born Tuesday, August 22, 1939 in Stet, Missouri, she was the daughter of the late Thomas Jacob Conaway and the late Ethel Mae Clemens Conaway. Mrs. Hostetter lived most of her life in the Marshall and Higginsville area. She married Joseph Hostetter on December 23, 1972; he preceded her in death on January 15, 2013. Mrs. Hostetter worked as a bookkeeper/secretary for Higginsville Chrysler, retiring in 2000. She was also a member of the First Baptist Church in Higginsville. In addition to her husband, also preceded in death was one daughter, Debbie Sauble-Hostetter and one grandson, J. W. Sauble. Surviving are son, Doug (Miranda) Hostetter of Independence, MO, two daughters, Yvonne (Ray) Reeves of Keokuk, IA and Nancy Noyes of Wichita, KS, two brothers, Dale (Pat) Conaway of Marshall, MO and Kenneth (Virginia) Conaway of Marshall, MO, two sisters, Betty Bosley of Marshall, MO and Barbara (Norman) Dial of Nelson, MO and 3 grandchildren. A funeral service will be at 2:00 PM on Saturday, February 25, 2017 at Hoefer Chapel located at 1600 Main St. Higginsville, Missouri 64037 with Dr. Greg Fine officiating and Dennis Million as vocalist. Interment will be in City Cemetery, Higginsville, MO. Pallbearers are Ray Reeves, Bruce Bosley, Jr. Bosley, Raymond Coslett, Dennis Million and Sevier Hoefer. Honorary pallbearers are Dave Tracy and Bill Marshall. The family will receive friends one hour prior to the service, beginning at 1:00 PM on Saturday at Hoefer Chapel. Memorial contributions may be sent to Crossroads Hospice or the National Parkinson's Foundation. Online condolences may be made to the family at www.hoeferfuneralhome.com

The family of Carolyn F. Hostetter created this Life Tributes page to make it easy to share your memories.

Send flowers to the Hostetter family.