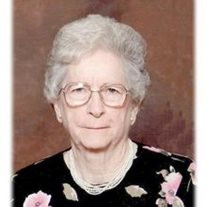 Catherine Frances (Klein) Wozniak, age 93, of Higginsville, Missouri died Friday, October 16, 2009, at Meyer Care Center in Higginsville. She was a member of St. Mary's Catholic Church in Higginsville and a member of the Altar Society of the Church. She was instrumental in starting the Parish School of Religion for the children of St. Mary's Catholic Church and acted as Coordinator for many years. Catherine was a longtime member of the Church Women of Higginsville & Corder, worked many years with the local food pantry, Well Baby Clinic and the Classic Shop. She was a member of a china painting club over 40 years. She was born June 26, 1916 in Marshall, Missouri, the daughter of the late George Klein and the late Mary (Desmond) Klein.She lived most of her life in Higginsville. Catherine married Joseph A Wozniak June 26, 1954 and was a homemaker. She formerly taught school in Nebraska and Missouri. Her husband preceded her in death September 1, 2002. Also preceded in death are her parents; three brothers George Klein, Dennis John Klein and Robert Klein; and three sisters Margaret Boettcher, Julia Wozniak and Sister Agnes Klein. She is survived by her daughter: Marie Dittmer and husband Mark of Higginsville; one brother: Henry Klein and wife Merrel of Columbia, Tennessee; Four grandchildren: Joshua Dittmer, Jonathan Dittmer and wife Laura, James Dittmer and Jacob Dittmer; one great-grandson Colton Dittmer The family will receive friends from 9:30 A.M. to 10:30 A.M. Tuesday, October 20, 2009 at St. Mary's Catholic Church. Mass of Christian Burial will be at 11:00 A.M. Participants are Father Michael Mulhearn, Celebrant; Virginia Graham, Organist; and Julie Mintner, Vocalist. Interment will be at St. Mary's Catholic Cemetery. Pallbearers are Joshua Dittmer, Jonathan Dittmer, James Dittmer and Jacob Dittmer. Arrangements are being handled by Hoefer Funeral Home, Inc.

Catherine Frances (Klein) Wozniak, age 93, of Higginsville, Missouri died Friday, October 16, 2009, at Meyer Care Center in Higginsville. She was a member of St. Mary's Catholic Church in Higginsville and a member of the Altar Society of the... View Obituary & Service Information

The family of Catherine Frances Wozniak created this Life Tributes page to make it easy to share your memories.

Send flowers to the Wozniak family.