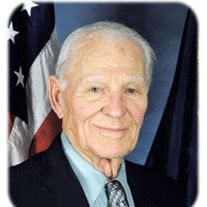 Cecil W. Repp, age 93 of Higginsville, Missouri died on Saturday, February 22, 2014, at his home. Born Wednesday, December 29, 1920 in Fort Scott, Kansas, he was the son of George William Repp and Olive (Colson) Repp. Mr. Repp spent his childhood in LaCygne, Kansas. He married Mary Louise Laughery on March 30, 1940 at Mapleton, Kansas. He was employed with the Department of Engineers in the Panama Canal zone before enlisting in the U.S. Navy in 1945 where he served in the South Pacific area during WWII. After his military enlistment, he lived in Butler, Missouri working at Kahn Chevrolet before moving to Higginsville where he owned and operated Repp Motor Company, a Chrysler dealership from 1953-1990 when he retired. He was a member of Central Christian Church where he served on the board, was an elder, deacon and treasurer for many years Mr. Repp was a member of the American Legion Post #223, and the Higginsville V.F.W. A member of Higginsville Chamber of Commerce, Mr. Repp was awarded "Business Man of the Year" in 1991 and "Outstanding Community Service" in 1998. He served as chairman of the Higginsville Country Fair Committee and produce show for 8 years, and was a former member of the Higginsville Park Board, Rotary Club, and Mainstreet Higginsville. After his retirement, he was active as a real estate agent. Preceding him in death are his parents; step-father, Harry Armstrong; his wife, Mary Lou Repp on January 14, 2007; a son-in-law, Donald Bird; four brothers, Loren Repp, George Repp, Russell Armstrong and Vaughn Armstrong. Survivors are two daughters, Patti (Darrell) Tilly and Joanie (Jim) Goebel, both of Higginsville; one brother, Lee Armstrong of LaCygne, Kansas; five grandchildren, Anthony (Barb) Bird of Blue Springs, Missouri; Brady (Ashley) Bates of Houston, Texas; Patrick Goebel of Blue Springs; Shaun Tilly of Higginsville; Kyle (Janine) Tilly of St. Louis, Missouri; six great-grandchildren, Johnna (Brett) Swisher of Windsor, Missouri; Julie Anderson of Sedalia, Missouri, Ava Scott, Hudson Bates, and Landon Bates of Houston, Texas; and Matthew Tilly of St. Louis, Missouri; and seven great-great-grandchildren. A Funeral service will be at 2:00 P.M. on Wednesday, February 26, 2014 at Central Christian Church, 16 W. 20th St. Higginsville with Pastor Matt Limback officiating, Robert Windsor as honorary assisting minister, Melody Coen as organist and Kenny Branson as vocalist. Interment will be in the Higginsville City Cemetery. Friends may call from 1:00-2:00 P.M. on Wednesday prior to the service at the church. The family suggests Memorials to the Central Christian Church or John Knox Sidewalk Fund. Pallbearers are Anthony Bird, Brady Bates, Patrick Goebel, Shaun Tilly, Kyle Tilly and Brett Swisher. Honorary pallbearers are Richard Johnson, Leland Buckler, Larry Morris, Glenn Opfer, David Pulliam, Daljeet Singh and "John Knox Morning Coffee Friends". Online condolences may be made to the family at www.hoeferfuneralhome.com

The family of Cecil W. Repp created this Life Tributes page to make it easy to share your memories.

Send flowers to the Repp family.