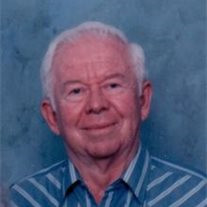 Charles S. "Bud" Schaeperkoetter, age 80 of Corder, Missouri died on Friday, April 20, 2012, at St. Luke's Hospital in Kansas City, Missouri. Born Thursday, September 3, 1931 in Marshall, Missouri, he was the son of Charles W. Schaeperkoetter and Margaret V. (Starke) Schaeperkoetter. He married Mary Barbara Schumaker on August 21, 1955. She preceded him in death on April 2, 2000. Also preceded in death are his parents and a sister, Barbara Jean Starke. He lived most of his life in Corder, Missouri where he farmed until retiring in 1993. He was a member of Immanuel Lutheran Church in Higginsville. A charter member of the Corder Lions Club and former Chief of Police in Corder, Mr. Schaeperkoetter served on the Lafayette County Sheriff's Reserve and the Concordia Police Department. He also served on the Lafayette County C-1 School Board, Corder Special Road District, former Elder of the Corder Presbyterian Church and former Treasurer of the City of Corder. He helped start the Lafayette County Emergency Management Team and was its first Director. He was the former President of the Corder Calvary Cemetery Association Board. He also was with the Corder Fire Department for over 30 years and served as a former Fire Chief of the Corder Fire Department. Surviving are one son, Mitch and wife Sherry Schaeperkoetter of Corder, Missouri and one grand daughter Morgan Schaeperkoetter. .A Graveside service will be at 10:30 A.M. on Friday, April 27, 2012 at Calvary Cemetery in Corder, Missouri with the Pastor Marcus Jauss officiating. Memorial contributions may be sent to Immanuel Lutheran School, 1500 Lipper Ave. Higginsville. Online condolences may be made to the family at www.hoeferfuneralhome.com

The family of Charles S. "Bud" Schaeperkoetter created this Life Tributes page to make it easy to share your memories.