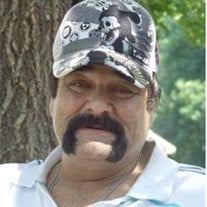 Christopher Robert Bauer, 54, formerly of Higginsville and Kansas City, died at his home in Albuquerque, New Mexico on October 25, 2010. Memorial services will be held at the Hoefer Funeral Home Chapel, Higginsville, Missouri on November 13, 2010 with Pastor Marcus Jauss officiating. Visitation will commence at 9:30 a.m., with service following at 10:30 a.m. Cremation. Chris was born on March 20, 1956 in Corona, California to Robert Adams and JoAnn Semnacher. Kenneth H. Bauer adopted Chris after his marriage to JoAnn Semnacher. Chris grew up in southern California and moved with his family to other military installations throughout the United States. He served in the Army and Air Force and was a veteran. He was a security officer for Parrent Security in Oxnard, California; over-the-road truck driver; and a practical nurse. He was a member of Immanuel Lutheran Church in Higginsville and was in the process of transferring his membership to Immanual Lutheran Church in Albuquerque, New Mexico. He is survived by his father, Kenneth H. Bauer and stepmother, Linda Tracy Bauer, of Higginsville; two daughters, Nicole Munson of Waynesville and Crystal Ortiz of Kansas City; one son, Kenneth Lee Bauer of Clearwater, Florida; two half sisters, Melissa (Neil) Hesse of Rutland, Vermont, and Kathy (Chuck) Baker of Washington state; one step sister, Jeanna (Ryan) Roepe of Corder, Missouri; two step brothers, Kenneth (Deanna) Wood and John (Karrie) Wood of Higginsville; and six grandchildren. His mother preceded him in death on May 3, 2000. The family suggests memorial contributions to Immanuel Lutheran Church of Higginsville. Online condolences may be made to the family at www.hoeferfuneralhome.com

The family of Christopher R. Bauer created this Life Tributes page to make it easy to share your memories.

Send flowers to the Bauer family.