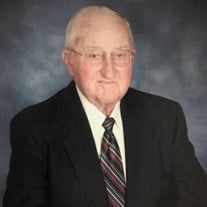 Clarence John Meineka, age 100, a loving father, grandfather and great-grandfather was called to his Heavenly home on January 19, 2022. He passed peacefully at his farm home surrounded by his daughters and his pastor. Clarence was born December 8, 1921, in Concordia, Missouri to Carl and Magdalena (Dittmer) Meineka. He attended Handly Country School, even serving as a young lad to be the school’s custodian. He was confirmed in the Lutheran faith at St. Matthew’s Lutheran Church in Ernestville. After the bombing of Pearl Harbor, Clarence volunteered to serve his country and was inducted into the US Army in 1942. He earned the rank of Staff Sergeant and fought on the front lines of battles at Leyte, Philippines, Okinawa, Japan, and survived some of the most horrific battles of WWII. While on furlough, before shipping overseas to the war, Clarence married Lorene Evelyn Schnakenberg. The date was May 14, 1944 and the setting was Zion Lutheran Church in Corder. They were blessed with 10 years of marriage and 3 daughters. After being discharged from the army in 1946, Clarence came home to engage in his love of farming which he continued all his life. Other occupations after he retired his dairy herd included, reading meters for West Central Electric, running a motor grader for maintaining roads for Lafayette County Road District, receiving the training for administering artificial insemination to cows working alongside his brother-in-law, Lawrence Heimsoth. Clarence was a member of Immanuel Lutheran Church in Higginsville, where he served in various capacities: as elder, trustee, choir member and on the board of education. After Lorene’s tragic death on May 3, 1954, Clarence found the second love of his life. He and Emilie Ida Schmohe married on January 15, 1956, at Immanuel Lutheran where Emilie was also an active member. They were blessed with 47 years of marriage with Emilie passing on October 16, 2003. Clarence’s life exemplified service, hard work, humor and he infused these values into his family. Surviving with a lifetime of wonderful memories are three daughters, Bonnie (L.H.) Dickmeier of Higginsville; Juliene McCormick of Savanna, IL; Carol (Rick) Houghtlin of Kansas City, MO; nine grandchildren, sixteen great-grandchildren, and four step great-grandchildren. In addition to his parents and two wives, Clarence was preceded in death by three sisters, Lorna Kuecker, Marie Bockelman and Pauline Bockelman; three brothers, Albert Meineka, Elmer Meineka and Vernon Meineka. A funeral service will be held at Immanuel Lutheran Church on Saturday, January 29, 2022 at 2:00 PM with a public visitation from 12:30 - 1:30 PM and eulogies given the last half hour before the funeral service. Because of the Omicron prevalence in the area at this time, mask wearing is highly recommended. Rev. Kurt Brandon will officiate and burial with full military honors will be in the Higginsville City Cemetery where he will take his last ride to the cemetery by horse and wagon. Casket Bearers are Kevin Dickmeier, Jody Dickmeier, Tim Houghtlin, Brian McCormick, Jeff Houghtlin, Joe McCormick - Clarence’s grandsons. His granddaughters, Monica Stulac, Megan McCormick, and Katie Kubitz, will be participating in the funeral service liturgy. Honorary Casket Bearers are Steve Dyer, Wally Dyer, Darrel Rinne, Harvey Erdman, Bud Walker, Bruce Graff, Mel Bockelman. Memorial contributions may be made to Immanuel Lutheran Church Radio Ministry or Crossroads Hospice.

Clarence John Meineka, age 100, a loving father, grandfather and great-grandfather was called to his Heavenly home on January 19, 2022. He passed peacefully at his farm home surrounded by his daughters and his pastor. Clarence was born December... View Obituary & Service Information

The family of Clarence Meineka created this Life Tributes page to make it easy to share your memories.

Send flowers to the Meineka family.