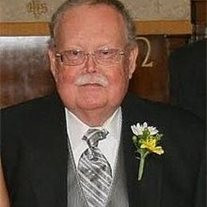 D. Kim Null, age 58 of rural Corder, Missouri died on Wednesday, September 1, 2010, at St. Joseph Medical Center in Kansas City, Missouri. Born Sunday, September 23, 1951 in Windsor, Missouri, he was the son of Russell Null and Fern Rains Null. He graduated from Warrensburg High School in 1969, Central Missouri State University in 1972, and the UMKC School of Law in 1975. He married Ann Boyd Evans in Kansas City, Missouri on June 18, 1977. Kim did rate regulation in the trucking industry in Kansas City & St. Louis for several years, and then had a private practice as an attorney in Lafayette County, Missouri. He was the municipal judge in Corder for several years and he founded the Santa Fe Foundation in support of the Santa Fe schools. Kim enjoyed cooking, woodworking, traveling when his health allowed it, and spending time with his family. Kim was always willing to help people in his comunity. He was a member of the Waverly United Methodist Church. He was also a member of the Missouri Bar Associaiton. Surviving are his mother, Fern Null of Warrensburg; wife, Ann Null of the home; son, Eric Null (Christine Cecala) of Urbana, Illinois; daughter, Emily Null (K.J. Miller) of Overland Park, Kansas; brother, David Null of Madison, Wisconsin; & many aunts, uncles and cousins. He was preceded in death by his father. A Memorial service will be at 11:00 A.M. on Saturday, September 4, 2010 at Waverly United Methodist Church located at 116 W. Kelling Ave. Waverly, Missouri 64096 with the Pastor Michael Dunlap officiating and Tim Biesemeyer, vocalist. The Family will receive friends from 10:00 A.M. to 11:00 A.M. Saturday at the church. Suggested Memorials are to the Corder Fire Protection District or Santa Fe High School Foundation. Online condolences may be made to the family at www.hoeferfuneralhome.com

The family of D. Kim Null created this Life Tributes page to make it easy to share your memories.

Send flowers to the Null family.