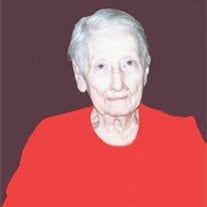 Daisy M. (Jordan) Amer, age 97 of Lexington, Missouri, formerly of Higginsville, died on Sunday, August 11, 2013 at Bench Mark Health Care of Lexington. Born Sunday, January 9, 1916 in Higginsville, she was the daughter of James B. Murrell and Nellie (Jones) Murrell. She married Joseph Melvin Jordan August 10, 1934. He preceded her in death January 24, 1968. She then married Albert Amer February 18, 1977. He preceded her in death December 17, 1986. Also preceding her in death are her parents, one son, James Melvin Jordan; and one brother, Ted Murrell. Mrs. Amer worked at the Higginsville Shoe Factory, Lake City Arsenal and then at the Higginsville Garment Factory. She was a cook at Irving Elementary School and then at the Higginsville Habilitation Center, retiring in 1981. She was a lifelong resident of Higginsville until moving to Lexington in 2008. She was a member of the First Baptist Church in Higginsville where she was a lifetime member and the oldest living member at the time of her death. Surviving are three daughters, Bonnie (Tommy) Jarvis of Higginsville, Judy (Lewis) Roberts of Lexington, Pam (Mike) Rogers of Higginsville; eight grandchildren, Mike (Vickie) Jarvis, Mitch (Jill) Jarvis, Mark Jarvis, Tracey (Mark) Weitkamp, Julie Roberts, Kristi (Bryan) Lloyd, Misti (Stanton) Runyan, Mandi Morgan;13 great grandchildren and 12 great great grandchildren.. A Funeral service will be at 10:00 A.M. on Wednesday, August 14, 2013 at the First Baptist Church, 1907 Peach St. Higginsville with Dr. Greg Fine officiating, Emily Runyan as pianist, Misti Runyan and Vicki Jarvis as vocalists. Interment will be in the Higginsville City Cemetery. The family will receive friends from 9:00 A.M. to 10:00 A.M. on Wednesday prior to the service at the church. Memorial contributions may be sent to the First Baptist Church. Casketbearers are Bryan Lloyd, Richard Haygood, Stanton Runyan, Dennis Million, Mike Jarvis and Mitch Jarvis. Honorary pallbearers are Mark Jarvis, Mark Weitkamp, Lonnie Murrell and Aaron Heyer. Online condolences may be made to the family at www.hoeferfuneralhome.com

The family of Daisy M. (Jordon) Amer created this Life Tributes page to make it easy to share your memories.