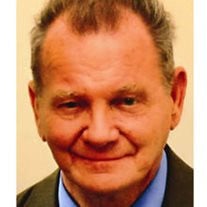 David Collier Houston, 74 of Higginsville, Missouri went to be with his Lord and Savior surrounded by his family and friends, on Thursday September 15, 2016, at Research Medical Center. Born Monday, April 27, 1942 in Warsaw, Missouri, he was the son of the late Willard L. Houston and the late Ida M. Long Houston. He lived most of his life in Higginsville. He married Linda Wilhite Houston on June 7, 1963 and she survives of the home. He was a member of Assembly of God Church in Higginsville where he was a deacon of the church and served the church in many capacities. David was a graduate of the Higginsville High School class of 1960. He holds the school record for the one mile run. He was a former member and president of the Higginsville Jaycees, and a member of the Teamsters Union Local #415. He was a truck driver for Superior-Bowen Asphalt in Kansas City, MO until he retired in 2004. Surviving are his wife Linda; one son, Tony (Tammy) Houston of Higginsville; daughter-in-law, Cyndi Houston of Higginsville; 7 grandchildren, Jessica (Doug) Hoeflicker, Matthew (Emily) Houston, Amanda Russell (David Yadon), Joey Lile (Atali Kumm), Sara Houston, Timothy Houston and Seth Houston; 6 great grandchildren Dakota Houston, Wesley Houston, Jaxon Hoeflicker, Jade Hoeflicker, Camden Yadon, Peyton Yadon. Also surviving are six sisters, Ruth (Gene) Harrison of Warrensburg, MO, Margaret (Ron) Bond of Paola, KS, Lois Judd of Independence, MO, Mary Helen Couch of Independence, Zella Bright of Independence and Wanda (Ron) Heyer of Independence. He is preceded in death by his parents; one son, Quinn Houston and two brothers, John and James Houston. A funeral service will be held at 10:00 AM on Tuesday at the Assembly of God Church in Higginsville with Pastor Dan Mahurin officiating and Debbie Mahurin, organist. Interment will be in City Cemetery, Higginsville, MO. The family will receive friends from 6:00 PM to 7:30 PM on Monday, September 19, 2016, at Hoefer Funeral Home. Memorial contributions may be sent to Assembly of God Church. Casket bearers are Matthew Houston, Joey Lile, Doug Hoeflicker, David Yadon, Timothy Houston and Seth Houston., Online condolences may be made to the family at www.hoeferfuneralhome.com

David Collier Houston, 74 of Higginsville, Missouri went to be with his Lord and Savior surrounded by his family and friends, on Thursday September 15, 2016, at Research Medical Center. Born Monday, April 27, 1942 in Warsaw, Missouri, he was... View Obituary & Service Information

The family of David Collier Houston created this Life Tributes page to make it easy to share your memories.

David Collier Houston, 74 of Higginsville, Missouri went to be...

Send flowers to the Houston family.