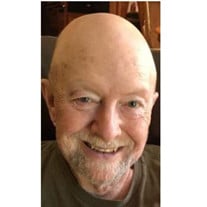 Dennis LeRoy Sheridan, 70 of Corder, Missouri passed away on Thursday, May 14, 2020, at his home. Born Friday, October 14, 1949 in Higginsville, Missouri, he was the son of the late Eugene Sheridan and the late Frances (Mendenhall) Sheridan. Dennis was blessed with four children from two marriages. Two children with Dana Quoetone and two with Lydia (Cunningham) Sheridan. Lydia preceded him in death 11/25/2017. Dennis was a graduate of Higginsville High School, class of 1967. In 1969 he enlisted in the United States Army reaching the rank of SGT, and would be honorably discharged in 1971. Dennis was a proud Vietnam Veteran wearing it proudly on his hat everywhere he went. Dennis moved to Colorado in 1973 and would not return to Corder until 2004. He spent most of his career as a fleet mechanic for the Public Service Company in Colorado. He attended First Baptist Church in Higginsville. Dennis enjoyed golfing, recreational target shooting, karaoke, playing guitar, and sometimes fishing. He was a league bowler in Denver and Higginsville for many years. Dennis had the most helpful soul you could ever have imagined. Dennis was a true family man, spending much of his time with his family and friends. He will be greatly missed by anyone that had the pleasure of meeting him. Surviving are one son, Kellen Sheridan (Kelly) of Centennial, CO; three daughters, Susan Sheridan of Warrensburg, MO, Donna (Danny) Hodson of Grain Valley, MO and Tawnee Sheridan of Henderson, CO; two sisters, Fran (George) Bayless of Higginsville and Lettie Gonzalez of Littleton, CO; six grandchildren, Darrius Sheridan, Ejyah Sheridan, Trey Hodson, Logan Hodson, Riley Hodson, Reznor Sheridan; and one great-grandchild, Delaney Sheridan. A memorial service will be held at First Baptist Church in Higginsville with the Rev. Dr. Greg Fine officiating. Inurnment will follow in the Missouri Veterans Cemetery, Higginsville. A Celebration of Dennis' life will be held at a later date where full military honors will be performed. In lieu of flowers, memorial contributions may be sent to the Corder VFW Post 4288 or the American Heart Association and mailed to Hoefer Funeral Home 1600 Main St. Higginsville, MO 64037.

Dennis LeRoy Sheridan, 70 of Corder, Missouri passed away on Thursday, May 14, 2020, at his home. Born Friday, October 14, 1949 in Higginsville, Missouri, he was the son of the late Eugene Sheridan and the late Frances (Mendenhall) Sheridan. Dennis... View Obituary & Service Information

The family of Dennis L. Sheridan created this Life Tributes page to make it easy to share your memories.

Dennis LeRoy Sheridan, 70 of Corder, Missouri passed away on...

Send flowers to the Sheridan family.