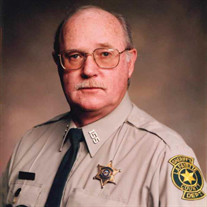 Richard "Dick Tracy" Dale Tracy, 77 of Lexington, Missouri met his Heavenly Father on Sunday, August 29, 2021, at Centerpoint Medical Center in Independence, Missouri. He was born Monday, November 15, 1943 in Higginsville, Missouri, and was the son of the late Floyd "Cotton" Tracy and the late Geneva Tracy (Chapman). He was a graduate of Corder High School and married Linda (Lowe) Tracy on December 23, 1971. Dick Tracy started his career as a locomotive train engineer but it ended after 18 years with an early retirement due to an injury. He then entered law enforcement for 20 years and had a second rewarding career as a Lafayette County Deputy and past Police Chief for the City of Wellington. In his retirement he drove the Oats Bus and enjoyed the company of the people he transported. Dick Tracy was a man who valued hard work and integrity. He was a Godly man and loved telling people about Jesus and the wonderful things He has done in his life. He was a faithful and active member of the Living Water Family Worship Center in Buckner, MO. Dick Tracy's pride and joy was his family. There wasn't a second that went by that he didn't want to be around his grandchildren. He attended every sporting event and supported his grandchildren with his love and affection. At Christmas time he gave out goodie bags and enjoyed telling stories of his life. His grandchildren and great-grandchildren have fond memories of the fishing outings that he frequently took them on. Dick Tracy will be sorely missed, but remembered as a man that loved Jesus and was thinking of his family until his very last breath. Surviving are wife, Linda of the home; daughter, Genny (Brad) Kleoppel of Odessa, MO; stepdaughter, Tammy Umphreys of Grain Valley, MO; brother, Gary (Ann) Tracy of Waverly, MO; sisters, Cheryl (Bob) Ellerman of Edwards, MO, Carol (George) Lefman of Higginsville and Linda (Kenny) Bauer of Higginsville; five grandchildren, Spencer, Corbin, and Noble Kleoppel, Jesse Umphreys, Anthony (Sierra) Weber; four great-grandchildren, Brycen and Isabella Kleoppel, Ethan and Stella Weber. He was preceded in death by two brothers, Don Tracy and Mack Tracy; one sister, Janice Jackson. The family will receive friends from 6:00 PM to 8:00 PM on Friday, September 3, 2021, at First Assembly of God Church, 1050 West 19th St., Higginsville, Missouri. A funeral service will be held at 10:00 AM on Saturday, September 4, 2021 at the church with Rev. Dave Mahurin officiating. Interment will follow in the Calvary Cemetery, Corder, MO. Casket Bearers: Corbin Kleoppel, Noble Kleoppel, Spencer Kleoppel, Tom Lowe, Paul Tracy, Jesse Umphreys. Honorary Bearers: Brycen Kleoppel.

The family of Dick Tracy created this Life Tributes page to make it easy to share your memories.

Send flowers to the Tracy family.