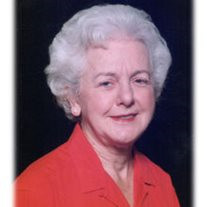 Doris Mae Farmer was born in Windsor, Missouri on July 17, 1926, the daughter of Maude V. (Doss) and James E. Farmer. As a small child she moved to Higginsville, where she lived until her death on January 22, 2014 at Meyer Care. She graduated from Higginsville High School in 1944 and married Howard Isaac ( Ike) Tobin on January 31, 1947. They were farmers in the Higginsville area and Doris was an original employee of Higginsville Walmart, working there for over 28 years. Ike preceded her in death on August 12, 1990. She later married Earl D. Struchtemeyer on February 23, 2002 moving to JKVE. Doris was the leader of the Southwest 4-H club, a 65 year member of Grace United Methodist Church, and belonged to several women's organizations over the years. She is preceded in death by her parents, her first husband Howard (Ike) Tobin, and one stepson, Ralph Struchtemeyer. She is survived by her husband, Earl, of the home; one daughter, Marla Tobin, M.D. and her husband Ronald Bowman, P.E. of Warrensburg; and one sister, Catherine Nuelle of Higginsville. She also leaves behind two stepdaughters, Esther (Ken) Long of Lawrence, Kansas; Kathy (Gary) Hoeppner of Lexington; two stepsons, Keith (Judy) Struchtemeyer and Olin (Carla) Struchtemeyer, all of Higginsville; and one step daughter-in-law, Marilyn Struchtemeyer of Jefferson City, Missouri. She also has an AFS daughter, Marcela (Ken) Keys of Oro Valley, Arizona, and their three grown sons in her extended family. Doris very much enjoyed her 11 grandchildren and 11 great-grandchildren, as well as many very special nieces, nephews, and cousins and their families who would visit her often and share family times. Arrangements will be made through Hoefer Funeral Home with visitation Friday, January 24, from 6:00-8:00 p.m. and a Celebration of Life at the Grace United Methodist Church in Higginsville on Saturday, January 25, 2014 at 10:30 a.m. Pallbearers include Gary McCulloch, Kenny Branson, Harvey Erdman, Wendel Oetting, W.N. Gray and John Koenig. In lieu of flowers, the family would recommend more enduring Memorials to the following organizations; Tobin Scholarship c/o Lafayette County C-1 Educational Foundation, Grace United Methodist Church, Higginsville, or The Missouri 4-H Foundation. Online condolences may be made to the family at www.hoeferfuneralhome.com

Doris Mae Farmer was born in Windsor, Missouri on July 17, 1926, the daughter of Maude V. (Doss) and James E. Farmer. As a small child she moved to Higginsville, where she lived until her death on January 22, 2014 at Meyer Care. She graduated... View Obituary & Service Information

The family of Doris Tobin Struchtemeyer created this Life Tributes page to make it easy to share your memories.