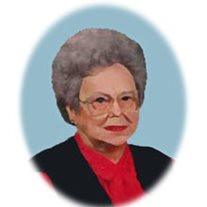 Dorothy Irene Goettling, age 90 of Higginsville, Missouri died on Friday, December 26, 2014, at Meyer Care Center in Higginsville. Born Monday, November 10, 1924 in Bland, Missouri, she was the daughter of the late Oliver Ray Thompson and the late Elma (Rector) Thompson. Dorothy and Richard R. Goettling were united in marriage on March 12, 1944. He preceded her in death December 26, 1988. Also preceding her in death is one brother, Ken Thompson and one sister, Mary Miller. Mrs. Goettling was employed as a seamstress at the Higginsville Garment Factory retiring in 1983. She also volunteered with the Foster Grandparent Program. She lived in Higginsville most of her life, was a member of Immanuel Lutheran Church and an honorary member of the Altar Guild of the Church. . Surviving are two sons,Bill (Darlene) Goettling of Higginsville and Deryl Goettling of Kansas City, Missouri; one brother, Tom (Vera) Thompson of Bland, Missouri; a brother-in-law, Bill Miller of Belle, Missouri and a sister-in-law, Ruth Goettling of Higginsville, 3 grandsons. Mike (Mary Jo) Goettling, Stephen (Donna) Goettling and John (Denise) Goettling; and 5 great grandchildren, Nick Goettling, Lacy Goettling, Cade Goettling, Carter Goettling and Coy Goettling. A Funeral service will be at 10:30 AM on Tuesday, December 30, 2014 at Immanuel Lutheran Church, 1501 Lipper St. Higginsville with Pastor Marcus Jauss officiating and Donna Owens as organist. Interment will be in the Higginsville City Cemetery. The family will receive friends from 9:30 A.M. to 10:30 A.M. on Tuesday, prior to the service at the Church. Memorial contributions may be made to Immanuel Lutheran Radio Broadcast or Crossroads Hospice. Pallbearers are "Grandsons and Great-Grandsons". Online condolences may be made to the family at www.hoeferfuneralhome.com

Dorothy Irene Goettling, age 90 of Higginsville, Missouri died on Friday, December 26, 2014, at Meyer Care Center in Higginsville. Born Monday, November 10, 1924 in Bland, Missouri, she was the daughter of the late Oliver Ray Thompson and the... View Obituary & Service Information

The family of Dorothy Irene Goettling created this Life Tributes page to make it easy to share your memories.

Send flowers to the Goettling family.