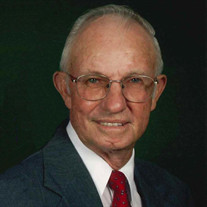 Earl Lambert Pregge, died on March 12, 2022, surrounded by his family at the Veterans Home in Warrensburg, MO. Earl was born on February 5, 1931 in Concordia, MO on the family farm to John Pregge Jr. and Eleonora Pregge (Boschen). He was the youngest of four brothers and one sister. Earl enjoyed the farm life and working in the fields. Farm life was in his blood and his happy place. As a young boy he delivered the mail on his beloved horse, Barney. Earl’s older brother, Omar, encouraged him to enlist in the United States Air Force. He served four years and was in the Korean War. He earned the rank of Airman First Class and was awarded the Korean Service Medal, United Nations Service Medal, National Defense Service Medal and Good Conduct Medal. He has always loved his country and was proud of his service. Following the Air Force, he began his career at the Gas Service Company where he retired after 37 years as the District Supervisor. After meeting his wife, Carol Ann (Ridder) Pregge, they enjoyed a loving and devoted marriage of 62 years. Earl and Carol created a loving family with two daughters and they blessed Earl and Carol with five remarkable, beautiful and loving grandchildren. Earl was able to meet his great-grandson, Henry, on a visit outside at the VA. He planned his schedule around the grandchildren’s activities not to miss anything. Family celebrations and special family vacations became a focus of Earl and Carol’s life. They loved planning trips to Cancun, a Caribbean cruise and the Disney Cruise with the whole family. It made them happy to see the joy in their grandchildren’s faces. They had a giving and kind heart that was shared with their grandchildren. Earl enjoyed traveling the world with Carol but a favorite trip was to Yellowstone National Park. Earl kept busy with Blue Ridge United Methodist Church as an Usher, Trustee and on the Administrative Board. He was a member of the American Legion of Independence, VFW of Corder, MO and the Masonic Lodge where he was a Past Master. At the end of his life, he spent time at the Missouri Veterans Home in Warrensburg where he met wonderful and caring friends. Earl leaves a legacy with everyone he came in contact with as a caring friend that was always there to lend a hand. He will be remembered and cherished by his family. He is survived by two daughters, Cheryl Stanberry (Stephen) and Karen Warmund (Sanford); 5 grandchildren, Bethany Sloderbeck (Jason), Jenna Levene (Eric), Christina Stanberry, Landon Warmund, Mackenzie Warmund; and one great-grandson, Henry Sloderbeck. Earl was preceded in death by his parents; wife, Carol Pregge; three brothers; and one sister. A funeral service will be held at the Blue Ridge United Methodist Church in Kansas City, MO at 2:00 PM on Saturday, March 19, 2022 with a visitation at the church starting at 12:30 PM. Interment with military honors will follow the service in the Calvary Cemetery, Corder, MO. Honorary casket bearers: Austin Ritter, Jason Sloderbeck, Stephen Stanberry, Landon Warmund and Sanford Warmund. In lieu of flowers, donations may be made to: Honor Flight of Kansas City.

Earl Lambert Pregge, died on March 12, 2022, surrounded by his family at the Veterans Home in Warrensburg, MO. Earl was born on February 5, 1931 in Concordia, MO on the family farm to John Pregge Jr. and Eleonora Pregge (Boschen). He was the... View Obituary & Service Information

The family of Earl Pregge created this Life Tributes page to make it easy to share your memories.

Send flowers to the Pregge family.