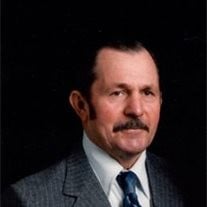 Elmer C. Jennings, age 89 of Blue Springs, formerly of Mayview, Missouri died on Tuesday, July 23, 2013, at St. Mary's Manor in Blue Springs, Missouri. Born Monday, January 28, 1924 in Iconium, Missouri, he was the son of John Jennings and Mary (Roberts) Jennings. He married Donna J Cobb on October 27, 1944. Mr. Jennings served in the U.S. Navy from 1944 until 1946 during WWII. ranking Seaman First Class. He was a lifetime member of Veterans of Foreign Wars, a member of the Zion United Church of Christ in Mayview, and a 1942 graduate of Mayview High School. He worked as a union carpenter for 45 years retiring in 1987. He lived in Mayview and then moved to the Blue Springs area in 1973. Surviving are his wife, Donna Jennings of the home; son, Alan (Beth) Jennings of Odessa, Missouri, daughters, Karen McAllister of Grain Valley, Missouri and Wanda Franklin of Grain Valley, Missouri; six grandchildren, Roman Franklin, Robert McAllister, Amber Schroeder, Loren McAllister, Jacob Jennings, Laif Jennings; 17 great grandchildren and one great great granddaughter. He was preceded in death by his brothers, Eugene Jennings and Loren Jennings; also one sister, Minnie Simpson. A Funeral service will be at 2:00 P.M. on Saturday, July 27, 2013 at Hoefer Chapel, 1600 Main St. Higginsville, Missouri with the Chaplain Tim Allison officiating. Interment will be in the Higginsville City Cemetery. The family will receive friends from 1:00 P.M. to 2:00 P.M. on Saturday prior to the service. Memorial contributions may be made to Family Choice. Casketbearers are Grandsons and Honorary pallbearers are Great Grandchildren. Online condolences may be made to the family at www.hoeferfuneralhome.com

The family of Elmer C. "Claude" Jennings created this Life Tributes page to make it easy to share your memories.