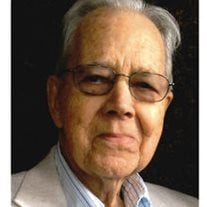 Elmer Louis Stuerke, 92 of Higginsville, Missouri died on Friday, March 18, 2016, at Meyer Care Center in Higginsville. Born Wednesday, May 16, 1923 in Sweet Springs, Missouri, he was the son of Edward H. Stuerke and Marie J. Ehlers Stuerke. He married Bethany Huscher on Novemeber 16, 1947 and she preceded him in death on June 7, 2012 He was a Veteran of World War ll, serving as a Tec 4 Sergeant in the Army and was awarded with a Philippine Liberation Ribbon, a Good Conduct Medal and the Bronze Arrowhead. He worked at Buck's grocery store and then worked as a retail pharmacy manager and co-owner of Huscher drug store, retiring in 2000. Elmer was a member of Immanuel Lutheran Church, Higginsville American Legion Post #223, Higginsville V.F.W., Church Men's Club and a past elder of the church. He enjoyed playing cards, shooting pool and was a Kansas City Royal's fan. He learned to play the violin by ear and from the help of his father. Surviving are one daughter, Kimberly L. (Mark) Widebrook of Overland Park, KS; one son, Stacy (Diane) Stuerke of Overland Park, Ks.; 2 grandchildren, Alex Claire (Justin) Hammer and Louis R. Stuerke both of Overland Park, KS. He is preceded in death by his parents; wife, Bethany; 7 brothers, Clarence, Edwin, Hugo, Marvin, Oscar, Leonard and Wilbur; 3 sisters, Mabel Mueller, Alice Ohan and Esther Stuerke. A Funeral service will be at 2:00 PM on Wednesday at Immanuel Lutheran Church with the Pastor Marcus Jauss officiating, Ken Stuerke, pianist, Hannah Stuerke, violist, and Donna Owens, organist. Interment will be in Missouri Veterans Cemetery, Higginsville, MO. The family will receive friends from 6:00 PM to 7:30 PM on Tuesday, March 22, 2016, at Immanuel Lutheran Church. Suggested memorials are to Immanuel Lutheran Church or School or Crossroads Hospice. Casket bearers are Ted Draper, Bob Gillilan, Aaron Brandt, Paul Brandt, Joe Rolf and Kevin Thurman. Online condolences may be made to the family at www.hoeferfuneralhome.com

The family of Elmer Louis Stuerke created this Life Tributes page to make it easy to share your memories.

Send flowers to the Stuerke family.