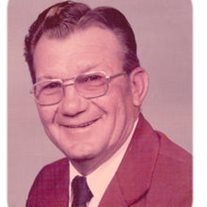 Everette H. Wahn, known to his friends as Poncho, age 87 of Higginsville, Missouri died on Wednesday, October 19, 2011, at Research Medical Center in Kansas City, Missouri. Born Wednesday, November 7, 1923 in Concordia, Missouri, he was the son of Elmer Wahn and Gladys Barker Wahn. Preceded in death are his parents, daughter, Donna Oetting, grandson, Matt Oetting, son-in-law, Tommy Gash, and brother, Elmer Wahn, Jr.. Everette was raised in Aullville, Missouri, moving to Higginsville in 1942. He married Roberta Pat Barker November 7, 1942. Everette became involved in the trucking business, hauling freight and lime. For several years he also drove for Brooks Truck Line and Riss Truck Line, hauling freight across the United States. He was also the safety instructor for Riss Trucking, receiving numerous safety awards, including the one million mile pin for having no accidents. In 1959,he went to work for Long Oil Company in Higginsville and worked for Long until 1974 when he started his own business, Wahn Oil Company, Inc. The company served the farming community for 25 years until his retirement in 1999. His family has been his first priority in his life and he was very involved with all of them. He was a lifelong member of the Central Christian Church where he was very active as an elder of the church, a member of the church board, men's fellowship and served on many committees. Everette also mowed the church cemetery for many years. He was a past member of the Higginsville Chamber of Commerce, I.O.O.F., and served on the Board of Directors of American Bank in Higginsville. He was also a member of the National Oil Jobbers organization where he was recognized as one of the top 30 oil jobbers in the United States. Everette was an avid NASCAR enthusiast in outlaw and sprint cars. He had a reserved place in the pits at Knoxville, Iowa for 38 years where he never missed the national event Survivors are his wife, Pat Wahn, of the home; three daughters Carolyn S. Gash, Patricia (Randy) Fiene, Sandy (Jim) Kronsbein; son-in-law, Gary Oetting; and one sister Mary Fricke, all of Higginsville; eight grandchildren, Jeff (Deanna) Gash, Dave (Kristy) Gash, Rex Gash, Shannon (Connie) Fiene, all of Higginsville; Jill (Michael) Ferguson of Maryland Heights, Missouri; Sara (Kyle) Deterding of Eudora, Kansas; and Laura (Jon) Oyler of Lee's Summit, Missouri; 23 great grandchildren and two great great grandchildren. A Funeral Service will be held Saturday, October 22, 2011 at 2:00 p.m. at the Central Christian Church located at 16 W. 20th St., Higginsville with Pastor Matt Limback officiating and Sharon Pragman as organist. Interment will be in the Higginsville City Cemetery. The family will receive friends from 12:00 P.M. to 2:00 P.M. on Saturday at the church. The Family suggests memorial contributions to Central Christian Church. Casketbearers are Jeff Gash, Dave Gash, Rex Gash, Danny Oetting, Shannon Fiene, Justin Gash and Ian Gash. Honorary pallbearers are Austin Oetting( in memory of Matt), Darrell Tilly, Jack Padley, Ivan Tankesley, Willie Gray, Richard Ryun, David Wagner, Leland Rinne, and Bill Schumaker. Online condolences may be made to the family at www.hoeferfuneralhome.com

The family of Everette H. Wahn created this Life Tributes page to make it easy to share your memories.

Everette H. Wahn, known to his friends as Poncho, age 87 of Higginsville,...

Send flowers to the Wahn family.