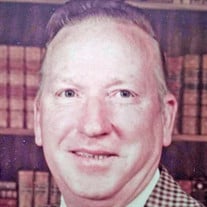 Francis L. "Buddy" Peppers, 94 of Higginsville, MO passed away on Wednesday, October 9, 2019, at Maples @ Har-Ber Meadows in Springdale, Arkansas. Born Sunday, September 13, 1925 in Higginsville, he was the son of the late Frank Peppers and the late Nancy Clouse Peppers. He was the husband of the late Georgia Peppers, marrying August 22, 1951. She preceded him in death May 30, 1998. He attended high school in Higginsville prior to joining the military. He joined the Merchant Marines at seventeen years old and at eighteen joined the United States Navy. Buddy served as a Seaman SW-6 in the Navy from 1944 until 1946 and was a Veteran of World War II. He worked for General Motor's Leeds Plant for a few years and then with TWA as a sheet-metal mechanic for 27 years, retiring in 1982. Buddy was a life long member of the American Legion. Surviving are two sons, Mitchell Peppers (Terry) of Agency, MO and Michael Peppers (Marcia) of Linn Valley, KS; one daughter, Gina Mitchell (Bobby) of Springdale, AR; nine grandchildren; and twenty-four great-grandchildren. He was preceded in death by his parents; wife Georgia Peppers; one daughter, Brenda Major; five brothers, and 5 sisters. He was the last surviving of eleven children. A funeral service will be held at 3:00 PM on Saturday, October 12, 2019 at Hoefer Funeral Home located at 1600 Main St. Higginsville, Missouri 64037 with the Pastor Chad Silvey officiating. Interment will follow the service with full military honors in the City Cemetery, Higginsville. Casket bearers: Austin Mitchell, Bob Mitchell, Gabe Mitchell, Mike Peppers, Mitch Peppers, Dennis Stoll. The family will receive friends from 2:00 PM to 3:00 PM on Saturday at Hoefer Funeral Home. Memorial contributions may be sent to American Legion Post #223.

Francis L. "Buddy" Peppers, 94 of Higginsville, MO passed away on Wednesday, October 9, 2019, at Maples @ Har-Ber Meadows in Springdale, Arkansas. Born Sunday, September 13, 1925 in Higginsville, he was the son of the late Frank Peppers and... View Obituary & Service Information

The family of Francis L. "Buddy" Peppers created this Life Tributes page to make it easy to share your memories.

Send flowers to the Peppers family.