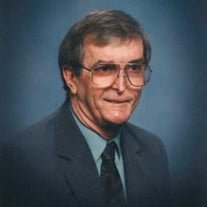 George Gilbert Mansfield, 85 of Higginsville, Missouri died on Tuesday, November 30, 2021, at his home in Higginsville. He was born Wednesday, July 22, 1936 in Creighton, Missouri and was the son of the late Honus Mansfield and the late Rosa... View Obituary & Service Information

The family of George Mansfield created this Life Tributes page to make it easy to share your memories.

Send flowers to the Mansfield family.