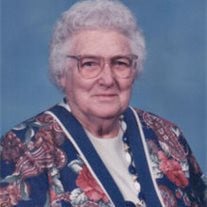 Gladys I. Mais, age 100 of Higginsville, Missouri passed away Friday, April 29, 2011 at the Meyer Care Center. Born Sunday, May 29, 1910 in Syracuse, Missouri, she was the daughter of William Birch & Minnie Bardwell Birch. She married Noble... View Obituary & Service Information

The family of Gladys I. Mais created this Life Tributes page to make it easy to share your memories.

Gladys I. Mais, age 100 of Higginsville, Missouri passed away...

Send flowers to the Mais family.