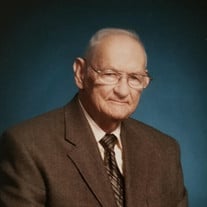 Glendon Ray Genser, 91 of Higginsville, Missouri was called to his eternal home on Monday, December 16, 2019, at Meyer Care Center in Higginsville, Missouri. Born Wednesday, November 28, 1928 in Higginsville, he was the son of the late Joseph Genser and the late Mary Genser (Santmeyer). He graduated high school in Somerville, MA and married Barbara (Hurst) Genser on April 9, 1949. Barbara preceded him in death on April 4, 2012. They were married 63 years. Glen served his country as a Construction Electrician - 3rd class, in the United States Navy and was a World War II veteran. After his military service he worked as a tool and gauge inspector for AT&T for 38 years before retiring. Glen was an avid outdoorsman. He enjoyed fishing, fly tying and had a passion for trap shooting and hunting. He was a member of the American Radio Relay League and enjoyed operating Ham radios. He was a faithful member of First Baptist Church in Higginsville. Glen was a member of the American Legion - Post 223, the NRA, and his Naval Seabee chapter. Surviving are one son, Keith Genser of Corder; one brother, Dale (Jo) Genser of Kansas City, MO; seven grandchildren, Gary Genser of Higginsville, Maria (Chad) Elwood of Kansas City, KS, Chris Frerking of Higginsville, Chase (Sarah) Genser of Corder, Jamie (David) Bowen of Albertville, AL, Megan Genser of Corder, Jake Genser of Higginsville; and eight great-grandchildren. He was preceded in death by his parents; wife, Barbara Genser; two sons, Steven Genser and Gary Genser; one daughter, Evelyn Ferlet; and one sister, Marylyn Loakso. A funeral service will be held at 11:00 AM on Saturday, December 21, 2019 at First Baptist Church in Higginsville, with the Rev. Dr. Greg Fine officiating. Interment will follow with full military honors in the Higginsville City Cemetery. The family will receive friends one hour prior at the church. Casket bearers: Adam Beck, Bryce Bortka, Lane Frerking, Chase Genser, Gary Genser, Jake Genser. Glen was proud of his God, his country, and his service to this country. He would want nothing less than memorials to go to First Baptist Church or the Wounded Warrior Project - A nonprofit organization that offers a variety of programs and services to wounded veterans.

The family of Glen R. Genser created this Life Tributes page to make it easy to share your memories.

Glendon Ray Genser, 91 of Higginsville, Missouri was called to...

Send flowers to the Genser family.