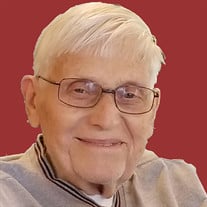 Rev. Glenn Albert Nowack, 90 of Higginsville, Missouri passed away on Saturday, September 21, 2019, at Meyer Care Center in Higginsville, Missouri. Born Wednesday, July 24, 1929 in Talmage, Nebraska, he was the son of the late Henry Nowack and the late Bessie (Eastep) Nowack. He was the husband of the late Shirley Nowack, marrying June 26, 1949. She preceded him in death July 12, 2018. Glenn graduated high school in 1947 from Talmage High School in Talmage, Nebraska. He earned a Bachelor's Degree from Elmhurst College in Elmhurst, Illinois and attended seminary school at Eden Theological Seminary in St. Louis, MO. Glenn loved the Lord and put Him first in all he did. Glenn started his career in Levasy, MO and was the founding pastor of Southwood United Church of Christ in Raytown, MO. He moved on to do God's work with St. Phillips United Church of Christ in St. Louis before settling in with Salem United Church of Christ in Higginsville from 1976-1996. After retiring from Salem he spent 12 years as an intern pastor with St. Paul United Church of Christ in Blackburn, MO before fully retiring from ministry. Glenn started the Youth on Mission program with Salem, was a board member for New Life Home and was a lifelong member of Rotary Club. Surviving are two sons, Stephen (Michele) Nowack of Lafayette, CO and Dan Nowack of Kansas City, MO; one daughter, Jana Nowack of Higginsville; one son-in-law, Paul Heimsoth of Concordia, MO; one brother, Robert (Joyce) Nowack of Brock, NE; two grandchildren, Hanni Herriott (Michael Stiles), Carter Lange; and one great-grandchild, Nash Stiles. He was preceded in death by his parents; loving wife Shirley Nowack; two daughters, Deanne Nowack and Julie Heimsoth (Nowack); and one brother, Dean Nowack. A funeral service will be held at 2:00 PM on Wednesday, September 25, 2019 at Salem United Church of Christ located at 1500 N. Main St. Higginsville, Missouri 64037 with the Rev. Dr. Tommy Faris officiating. Interment will follow the service in the Salem Cemetery, Higginsville. The family will receive friends from 5:00 PM to 8:00 PM on Tuesday, September 24, 2019, at Salem United Church of Christ. Casket bearers: Don Anderson, Cliff Brugman, Darrell Fiegenbaum, Ron Heinke, Mark Nowack, Stanton Thompson. Eulogies by: David Rauch and Stanton Thompson. Glenn was passionate about many organizations and the family hasn't selected a memorial yet, so memorial contributions may be sent to Family Choice until they select a proper organization.

The family of Rev. Glenn A. Nowack created this Life Tributes page to make it easy to share your memories.

Send flowers to the Nowack family.