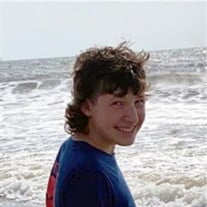 Harley Fisher Dunkin, 14 of Higginsville, Missouri passed away on Wednesday, July 28, 2021, at his home. He was born Tuesday, January 23, 2007 in Independence, Missouri. Harley was the beloved son of Corey and Tammy Trahern of Higginsville. He was starting his freshman year at Lafayette Co. C-1, where he was involved in many extracurricular activities. This included the Lafayette Co. C-1 Youth Theater, Chess Club, and the Rise Program for Gifted Children. Harley loved to read and listen to his music. His friends, family and especially his grandparents, were very special to him and he cherished his time with them. Harley truly loved giving to others and on many occasions he would go with Tammy to various nursing homes to help work with the dementia patients. He was a young man who had a huge heart. He was the type of friend who would walk you home in the rain with his umbrella even if that meant he was going to walk farther than needed. He was the friend who could empathize and support you when you needed someone to lean on. He was the type of friend who would say, "hello" to every person he knew whether it be his friend's younger siblings, a parent, or older brother. It seemed as though he never knew a stranger. He was always his true self. He was quirky, witty, and had a great sense of humor. You could often find him smiling or hear his infectious laughter when he was with friends. He was a great friend, classmate, and person who will always be missed by those lives he had touched with his kindness. He will always be remembered for his huge heart and foot rubs he gave Tammy. He will truly be missed by all. Surviving are parents, Corey and Tammy Trahern; biological parents, Bill and Holle Dunkin; four brothers, Austin Parrott (fiancée, Bailie Milton), Austin Lynch, Titus Hickman and Addison Lynch; one sister, McKenzie Parrott (fiancé, Zack Fordham); grandparents, Kevin and Sheila DeFord, Dennis VanWinkle, Mark Oberg and Christine Calvert, Lindell Calvert and Jacque Totten, Lynn Trahern; great-grandparents, Don Morrison, Tom and Alberta Steele, Fern and Dean Ellis, CL and Rosie Trahern, Kathleen Morrison; many aunts, uncles, and cousins. He is preceded in death by one grandmother, his angel and rock, Janice VanWinkle; one grandfather, Wallace "Ted" Trahern; two great-grandmothers, Millie Holsworth, Mary Morrison; and one great-grandfather, Ken Holsworth. The family will receive friends from 2:00 PM to 4:00 PM on Monday, August 2, 2021, at Salem United Church of Christ 1500 N. Main St.. Higginsville, MO 64037. A funeral service will follow at 4:00 PM. Per Harley's wishes, he'll be cremated after the funeral service and buried in the City Cemetery at a later date. Casket Bearers: Austin Parrott, Zackary Fordham, Titus Hickman, Nathaniel DeFord, Addison Lynch. Honorary Casket Bearers: Kevin DeFord, Jacob Tripp, Colin Davenport, Tony VanWinkle. Memorial contributions may be made to the family and mailed to Stewart-Hoefer Funeral Home 1600 Main St. Higginsville, MO 64037.

Harley Fisher Dunkin, 14 of Higginsville, Missouri passed away on Wednesday, July 28, 2021, at his home. He was born Tuesday, January 23, 2007 in Independence, Missouri. Harley was the beloved son of Corey and Tammy Trahern of Higginsville. He... View Obituary & Service Information

The family of Harley Dunkin created this Life Tributes page to make it easy to share your memories.

Send flowers to the Dunkin family.