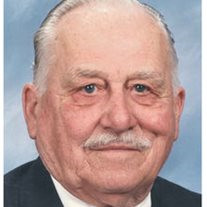 Harold Charles Frede, 97, of Higginsville MO, died on July 4, 2018 on his farm. Born on August 28, 1920 in Higginsville he was the only child of German-Americans Arthur Frede and Alma (Baur) Frede. The family farm was settled in 1918 and growing up Harold worked the land along side his father through the years of The Great Depression giving him shrewd business acumen and a firm grounding in living life without excess. He gained his education in the Mayview school district and chose to complete his high school diploma there. Before moving to Kansas City, Harold married his first wife Icel N. Hix on May 16, 1945. She preceded him in death in 1975. After Harold's mother and father died in a car accident in 1967, he and Icel moved back to the family farm and brought with them their two children, Robert Lee Frede (1946-1984) and Lori (Frede) Crabtree (1960-1989). On July 28, 1980 he married his second wife, Juanita Mackie who preceded him in death in 1989. Harold has one grandson, Clayton Crabtree of Odessa, MO, born to Lori and Carl Crabtree in 1985. Harold worked many jobs including 10 years at the Westinghouse Aviation Gas Turbine Division from 1950-1960, developing metallurgy and experimental welding methods for turbo jet engines, and Lake City Ammunition Plant from 1968 until his retirement in 1984 where he gained the nickname "Whitey" because of his white hair. At Lake City he was an electrician and refrigeration line controller. He has also worked as a truck driver and continued farming until his death. Harold was an active member and usher of Grace United Methodist Church in Higginsville. After his retirement from work, Harold enjoyed many road-trips out East, up North, down South to places like Truth or Consequences, New Mexico, and especially to Branson, MO. Harold liked old country music and attending local dances in the Lafayette County area. He had an encyclopedic knowledge of tractors and enjoyed trading farm equipment. With an inquisitive mind and ingenious craftsmanship skill set, Harold was able to build or repair anything from a barn to hydraulic cylinders on a backhoe. He outlived many friends and family but never stopped being open-minded of the future. This month, with 100 years of family farm ownership, he and his grandson were proud to receive Missouri Century Farm Designation. Harold continued to live on the farm independently and in good health. Harold lived by the manta that like a good piece of farm equipment - in life you wear out or you rust out, and he didn't want to rust out. Always one to stay active Harold died while working on the upkeep of his farm.

Harold Charles Frede, 97, of Higginsville MO, died on July 4, 2018 on his farm. Born on August 28, 1920 in Higginsville he was the only child of German-Americans Arthur Frede and Alma (Baur) Frede. The family farm was settled in 1918 and growing... View Obituary & Service Information

The family of Harold C. Frede created this Life Tributes page to make it easy to share your memories.

Send flowers to the Frede family.