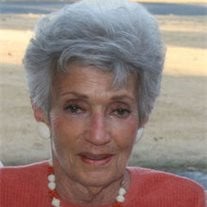 Harriet Shirley Hartman Huscher, age 84, of Higginsville passed away in her sleep at her daughter's home in Dallas, Texas in the early hours of Wednesday, August 29th. Harri was born on January 21, 1928 in Jacksonville, Florida to Joseph Lee and Ann Severance Hartman. She graduated from Robert E. Lee High School (Jacksonville) in 1945 and subsequently graduated from Stephens College in Columbia with an Associates of Arts degree in 1947. During her time at Stephens, she met Edward Allen Huscher of Higginsville, who was attending the University of Missouri. They were married on September 13, 1947 and Mrs. Huscher resided in the Higginsville area for the remainder of her life. Always a willing volunteer, Harri devoted her energies to community activities, serving as a past President for Chapter EK P.E.O., the Lafayette County Cancer Coalition and the University of Missouri Extension (Higginsville). She was one of the founders of the Ambulance Fund and the Sheltered Workshop, a spirited member of the local "Women as Land Owners" counsel and the Red Hat Club, and a Member Laureate of Beta Sigma Phi. A long-serving director of the Citizens Telephone Company, she was named a Director Emeritus upon her retirement. Harri created a college scholarship awarded each year to a Higginsville student. This lifetime of contributions was honored in 2010 when the Higginsville Chamber of Commerce named her "Person of the Year". Harri was an active member of Christ Episcopal Church (Lexington), serving on its vestry. She served as a representative to the Diocesan Convention of West Missouri and as that Convention's representative to the Washington Cathedral. Harri was also a member of the American Legion Auxiliary. After being preceded in death by her husband in October 1981, Harri managed Huscher Drug Store until its sale; she managed the family farming operation until her death. Surviving are three children, Pamela (Doctor) Rosey of San Diego, California; Valerie (Barron) Bell of Dallas, Texas; and Justin (Hilarie) Huscher of Chicago, Illinois; and three grandchildren, Arundel Bell and Barron Bell of Dallas, and Elspeth Huscher of Chicago. Also surviving are Mrs. Huscher's two sisters: Joan Imig of Ventura, California and Nancy Hartman of Somerset, New Jersey. A funeral service will be held at 2:00 p.m. on Saturday, September 1st at Christ Episcopal Church, 1300 Franklin Avenue, Lexington with the Very Rev. Canon Dr. William J. Fasel officiating; Rev. Sharron Heathman Deacon, Assisting; Perry Beam as organist and Patricia Holtcamp as vocalist.. Interment will be in the Salem Cemetery, Higginsville. The family will receive friends from 7:00 to 8:30 p.m. on Friday at Hoefer Funeral Home. The family suggests memorials to either the Higginsville Ambulance Fund, PO Box 110, Higginsville or Christ Episcopal Church, PO Box 307, Lexington, MO 64067-0307. Pallbearers are Jeffrey Kappelman, Kerry Kirk, Mark Nuelle, Reed Opfer, Kevin Thurmon and David Williams. Honorary pallbearers are Brian Cornelius, Dawson "Slick" Heathman, Dale Hilgedick, Patti Holtcamp, Marie Robinson, Dr. Daljeet Singh and Fred Tempel.

Harriet Shirley Hartman Huscher, age 84, of Higginsville passed away in her sleep at her daughter's home in Dallas, Texas in the early hours of Wednesday, August 29th. Harri was born on January 21, 1928 in Jacksonville, Florida to Joseph Lee... View Obituary & Service Information

The family of Harriet Shirley Hartman Huscher created this Life Tributes page to make it easy to share your memories.