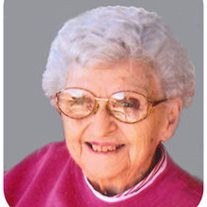 Helen M. Beck, 87, formerly of Higginsville, Missouri died on Saturday, October 1, 2016, at New Haven Living Center in Odessa, Missouri. Born Saturday, December 22, 1928 in Mc Alester, Oklahoma, she was the daughter of the late Wylie T. Holbert and the late Gladys Cook Holbert. Helen lived in Odessa, Missouri and graduated from Odessa High School Class of 1946 then moved to Higginsville in 1947. She and E.J. Beck were married on September 24, 1947; he preceded her in death on March 17, 2011. Also preceded in death was one son, Steven Ray Beck. She was an active member of St. Mary's Catholic Church in Higginsville and a member of the St. Mary's Altar and Rosary Society. She also was a member of the American Legion Auxiliary, formerly assisted with the Oats Bus, and a former member of the Higginsville State School Parent's Association. Helen and her husband owned and operated Beck's Cafe in Higginsville until retiring in 2000. Surviving are son, Richard Beck of Grandview, MO, daughter, Linda (Mike) Marrs of Grandview, MO; 5 grandchildren; 6 great grandchildren. A Rosary service conducted by Juanita Rinne will be at 9:30 AM on Thursday, October 6, 2016 at St. Mary's Catholic Church located at 401 W. Broadway St. Higginsville, Missouri 64037 with a Mass of Christian Burial to follow at 10:00 AM with Father Robert Duesdieker as officiant. Virginia Graham will serve as organist. Interment will be in Missouri Veterans Cemetery, Higginsville, MO. Pallbearers are Greg Wise, Chris Franklin, Roger Rinne, Bobby Wise, Ed Christoffersen and Joey Beck. The family will receive friends from 6:00 PM to 8:00 PM on Wednesday, October 5, 2016, at Hoefer Funeral Home, 1600 Main St., Higginsville, Missouri. Memorial contributions may be sent to Lafayette County Special Olympics Fund, 2310 Highway 13, Suite 103 Higginsville, MO 64037. Online condolences may be made to the family at www.hoeferfuneralhome.com

The family of Helen M. Beck created this Life Tributes page to make it easy to share your memories.