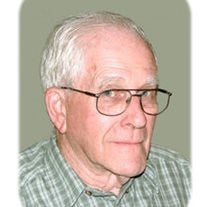 Henry Shobe Ernstmeyer, age 95 of Warrensburg, Missouri, formerly of Corder, Missouri died on Monday, October 13, 2014, at Country Club Care Center in Warrensburg, Missouri. Born Sunday, November 10, 1918 in Corder, he was the son of the late August William Ernstmeyer and the late Edna Richard (Shobe) Ernstmeyer. He married Martha Pauline Willard on December 16, 1942. She preceded him in death on June 3, 2011. Also preceded in death are one son; August Isiah Ernstmeyer, daughter; Paulette Dieckhoff and one sister; Georgia Summers. A member of Corder United Methodist Church and a trustee at the church for a number of years, Henry lived most of his life in Corder until moving to Warrensburg in 2008. He worked as an electrician and appliance serviceman for Lefman Electric, retiring in 1983 and served in the U.S. Army during World War II ranking Sergeant. Henry graduated in 1936 from the Corder High School. He was a member of the Missouri Archeological Society-Sedalia Chapter and a lifttime member of the Corder V.F.W. Surviving are two daughters, Rebecca (Duane) Limback of Warrensburg and Wilma (Charles) Catlin of Springfield, Missouri; 6 grandchildren, Derek Limback, Lisa Lockard, Sarah Catlin, Michael Dieckhoff, David Dieckhoff, Adam Dieckhoff, and 14 great grandchildren. A Funeral service will be at 10:30 A.M. on Friday, October 17, 2014 at the Corder United Methodist Church, 316 N. Main St. Corder with Pastor Ralph Varner an Chaplain Erich Kurz officiating, Tim Biesemeyer as pianist, and Derek Limback as Trumpeter. Interment will be in the Corder Calvary Cemetery. The family will receive friends from 9:30 A.M. to 10:30 A.M. on Friday prior to the service. Memorial contributions may be made to Corder VFW Post 4288, Corder United Methodist Church or the Corder Library. Pallbearers are Michael Dieckhoff, Adam Diekhoff, Derek Limback, Greg Lorenz and Doug Lorenz. Honorary pallbearers are Rodney Lorenz, Don Lilleman and Bob Pritchard. Online condolences may be made to the family at www.hoeferfuneralhome.com

The family of Henry Shobe Ernstmeyer created this Life Tributes page to make it easy to share your memories.

Send flowers to the Ernstmeyer family.