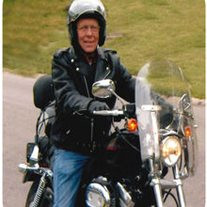 Howard E. Templeton, 75, of Corder, Missouri died on Tuesday, March 22, 2016, at his home. Born Tuesday, June 18, 1940 in Carrollton, Missouri, he was the son of the late Howard August Templeton and the late Mary Catherine (Lane) Templeton. Howard lived most of his life in the Kansas City area after receiving an Associate degree from a Junior College in Tyler, Texas. He married Sharon R. Schowengerdt on December 11, 1975. He worked as a field engineer at National Cash Register in Kansas City for 32 years before moving to Corder, Missouri in 1994. He served as Mayor of Corder for 4 years. Howard became a real estate broker and was co-owner of Heart Realty with his wife. At age 67 Howard bought his first motorcycle and also purchased one for his daughter, who became his 'riding partner'. He developed a love for motorcycles and enjoyed time riding along with many friends. He was a member of New Life Assembly in Concordia, Missouri, a former member of the Corder Lions Club and a former member of the Ararat Shrine Temple in Kansas City. He was preceded in death by two brothers. Surviving are his wife, Sharon, of the home; six sons, Nathan (Wanda) Norris of Higginsville, MO, Gene (Kristen) Templeton of Independence, MO, Pete Norris of North Kansas City, MO, Tim Templeton of North Kansas City, MO, Ed (Jane) Templeton of Independence, MO and Sylmon Thompson of Corder, MO, one daughter, Debbie (Erik) Webber of Corder, MO, two brothers, Larry (Dorothy) Templeton of Lees Summit, MO and Paul Templeton of Kansas City, MO, two sisters, Nancy Rice of Chetopa, KS and Becky Ray of Cherokee, KS; 21 grandchildren; 14 great grandchildren. A Funeral service will be at 11:00 AM on Friday, March 25, 2016 at New Life Assembly, Concordia, Missouri with the Senior Pastor Jack Blansit officiating. Interment will be in Dover Cemetery, Dover, MO. Pallbearers will be his sons. The family will receive friends from 9:30 AM to 11:00 AM on Friday, March 25, 2016, at the church. Memorial contributions may be sent to Lafayette County Cancer Coalition P.O. Box 88 Higginsville, MO 64037. Online condolences may be made to the family at www.hoeferfuneralhome.com

The family of Howard E. Templeton created this Life Tributes page to make it easy to share your memories.

Send flowers to the Templeton family.